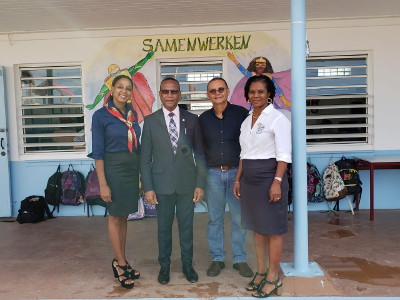 PHILIPSBURG:--- Minister of Education, Culture, Youth and Sports, the Honourable Wycliffe Smith visited the Sister Regina Primary School on Monday to personally apologize to the Principal, Samantha Beaton and staff for the error made in his presentation to Parliament last Friday. This visit followed the Minister’s discussion with the Chairperson of the Catholic School Board and telephone call to the Principal of Sr. Regina Primary where Mr. Smith apologized directly for his mistake.
Mr. Smith said, “I accept the responsibility for this error. It was a misplacement of the information received from the Catholic School Board, and it was my mistake to attribute the entire number from across all the schools under that foundation to only one school. It was quite unfortunate, but definitely not meant to misrepresent the management and staff of the Sr. Regina Primary School.”
On Friday, September 14, 2018, Minister Smith updated Parliament regarding the status of the Education Sector post-Hurricane Irma. In his presentation, the Minister highlighted the status of educational infrastructure, the current status of the teacher shortage, as well as steps taken by the Sector to prepare for the current hurricane season.
In error, the Minister’s presentation included incorrect information related to the SKOS school board. Whereas the information presented in Parliament highlighted one school as having 11 non-qualified teachers and several others requiring exemptions for seven teachers, the presentation should have indicated that the SKOS school board had a total of eleven non-qualified teachers teaching across its six schools. Seven of these teachers require dispensation from the Ministry of Education, Culture, Youth, and Sport.
The Minister regrets the error in the reporting of the statistical information, and apologizes to the SKOS school board, the Parliament and the wider community, as it misrepresented the actual situation regarding the qualifications of the School Board’s staff. Rather, the Minister applauds SKOS for the initiative taken, in working with the Ministry, in seeking short-term creative solutions to secure the continuity of quality education for its primary and secondary students.
One year after the passing of Hurricane Irma, the Minister reported that all schools are operational with the exception of the Sister Marie Laurence School and the St. Maarten Academy Academic section. Both displaced schools are currently being housed at other locations awaiting the commencement or finalization of rebuilding efforts. The majority of subsidized schools have undergone significant repairs and are expected to be fully operational by January 2019, however there are several schools like the Milton Peters College which require more structural long-term interventions. The process of finalizing the repairs of the Public Schools are at varying stages, with the tendering process for repairs, which are to be finalized in the 2019-2020 academic year, currently ongoing.
As it relates to the teacher shortage, the Minister also presented additional details regarding the current status of teaching personnel within the island’s Public and Subsidized Schools. The total number of vacancies for the island’s schools has decreased from almost 50 in July to a total of twenty-seven vacancies within the Subsidized Schools and the Division Public Education. The SVOBE school board is currently in need of seven teachers including for the subjects Music, Dutch, Science, and Geography.
The FAVE school board is currently in need of two teachers for the subjects French and Integrated Science. The MAC school board is need of four teachers, one English teacher, one Visual Art teacher and two Physical Education teacher. CBA school board is need of one Spanish teacher. NIPA is in need of a total of two teachers, one Maritime teacher, and one Electrical teacher. The Division Public Education is in need of four Dutch teachers for its primary schools and four subject teachers for Automotive, English, Computer Repairs and Plumbing instruction and two technical assistants for Home Economics and IT for the St. Maarten Vocational Training School. The SDA, SPCOBE and SKOS school boards no longer have vacancies. Apart from these teaching vacancies, there is also a need for 10 teacher assistants within the Public Schools.
The Minister also highlighted in his presentation that school boards have signaled the risk of burn-out of their teachers, and in some cases increased sick leave, as many continue to work under less than ideal working conditions. Some with leaking roofs, some sharing facilities with other schools such that even staff rooms and other recreational rooms are now being used for instruction, and yet others are working shifts to support continuity of instruction as facilities are awaiting repair.
In terms of the preparations that are being made to enhance Safety and Emergency preparedness and response across all of the island’s schools, the Minister reported that significant steps have been made and that all schools have developed or are in the process of developing their individual emergency and response plans. Multi-disciplinary teams consisting of the Fire Department, Police, Red Cross, Division of Inspection-OCJS and the Student Support Services Division are expected to review these plans with the schools and to support the development of final drafts.