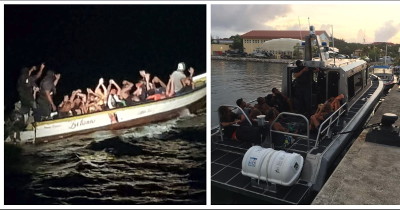 WILLEMSTAD:--- This morning around 2:00 am the Steunpunt Curacao received a report from the RCC that they saw on the radar an unlit vessel south of Klein Curacao that was operating at low speed (4 knots).
The Cutter Jaguar went straight to the indicated area. By 03: 45 the interception of the vessel took place. There were 23 undocumented people on board, 17 of whom were men and 6 were of Venezuelan nationality. The Jaguar received assistance from the Metal Shark I-03 to take the vessel to the Coastguard on MBPAR.
After the formalities of the coastguard were completed, the undocumented migrants were handed over to the police.