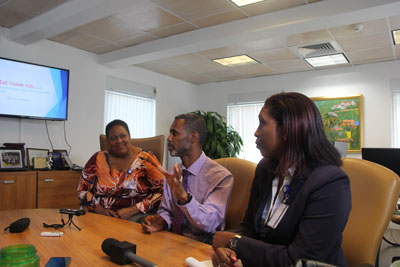 PHILIPSBURG:--- Management board of GEBE consisting of its Chief Executive Officer (CEO) Kenrick Chittick, its Chief Financial Officer (CFO) Iris Arrindell and its Chief Operations Officer (COO) Veronica Jensen Webster told members of the media on Tuesday that the company is facing severe financial challenges thus forcing them to make overall cuts for the survival of the utility company.
Arrindell said that while GEBE is able to pay its monthly bills at the moment they are already in breach of their agreement with Pacific Life. Arrindell explained that GEBE should have a 1.5 ratio in order to comply with the agreement but with the budget cuts the company can only meet a 0.6 ratio.
Due to the financial shortfall, GEBE management met with their employees on Tuesday morning to reveal the stark financial reality especially since they are trying to relieve the employees of some of their fringe benefits. GEBE has been paying the AOV premiums for its 252 employees for a number of years but now the company is trying to pass on some of those payments to the employees.
CEO Chittick explained that GEBE suffered close to NAF40M in damages due to the passing of hurricane Irma. He said the main office, water tanks ICT, street lights, poles and other material damages has placed a burden on the company. He explained that GEBE employees some of whom were homeless after the passing of Irma did a commendable job to get the island back on track. However, Chittick said that due to the damages their larger consumer such as hotels faced the company has lost either 30% to 40% of its revenues. He said prior to the passing of hurricane Irma the company was using 55megawatte of electricity per day but that has dropped to a mere 35megawatte per day which he said is building up slowly, but cautioned that the company will not return to normalcy until the end of 2019 to 2020 when the various hotels comes back online.
Chittick gave a presentation to the media where he outlined the damages the company suffered, besides the damages to the company’s infrastructure he said the fact that Philipsburg, Westin Resort, Sonesta Great Bay, and Devi Little Bay were out of operations created a huge loss of revenue for the company. The Management board of GEBE said that prior to hurricane Irma the company was collecting Naf 15M to Naf 18M monthly but that has dropped to either Naf.8M to Naf.11M monthly.
In order to survive management has decided to implement some measures such as putting a freeze on the hiring of new employees, cut and control overtime pay, cut leisure expenses, cut their advertising cost to 50%, cut consultancy costs, differ the dividend payments and concession payments.
Chittick said that GEBE management already dispatched a letter to the Government of St. Maarten regarding the dividend payments and to date they have not received a response. The management of GEBE stressed that the company does have a liquidity issue and if nothing is done now the company will go under by 2019. They stressed that they will not sit back and allow such to happen thus they have been bringing their employees up to par with the financial reality of the company and stressed that they have to work hand in hand for the company to survive the current crisis.
The company also intend to place the tab on the government of St. Maarten for the Reverse Osmosis System (RO) that had to be put in place post-Irma. Chittick explained that the RO plant was placed on Pond Island while two tanks were placed at other locations such as Belvedere and Madame Estate. He said these tanks will remain in place until GEBE could get its 8 damaged water tanks back up and running.
Restoration Post Irma.
Chittick said that since the passing of hurricane Irma the company has taken a number of measures to rebuild but to also prepare better for future hurricanes. He said everything that was above ground pre-Irma was flattened thus the company established 53 projects for underground cabling. GEBE do intend to rebuild its main office which houses the Finance and Audit departments, commercial and ICT. GEBE also had to place a hold on the ordering of engine 21 which they had intended to order in 2018 but due to the lack of revenues that has been pushed back to 2019 or 2020. GEBE also intends to take the company to Liquid Neutral GAS (LNG) by 2020.
To deal the problems the company is facing with its meters where consumers are not being billed and those that are being overbilled GEBE management said they intend to reseal its meters. They stressed that GEBE suffered loses with its distribution boxes, transformers, transformer stations, water storage tanks, both water and electrical meters.