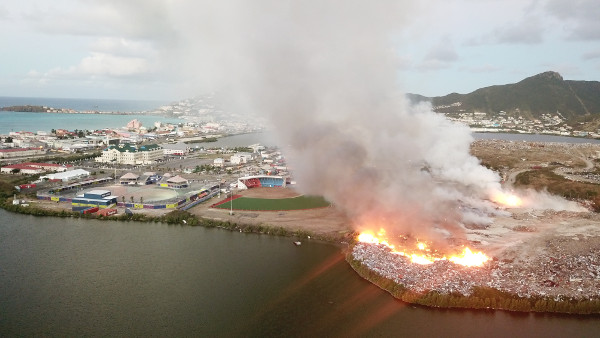 POND ISLAND:--- All streets leading to Pond Island were closed off by police due to the massive fire that started at the new dumpsite (Hurricane Irma debris) on Sunday afternoon February 4th. The Fire Department and other relevant departments who have been working through the night are doing their utmost to bring this situation under control and to finally put the blaze out. During the night many persons including families with children living on Pond Island were told to evacuate the area to avoid the inhalation of the heavy toxic smoke. The Emergency Dispatch, however, received several calls during the morning hours with concerns of persons still in the immediate vicinity of the fire. A search team consisting of police officers and firefighters again went into the area which was covered by heavy smoke and did a search. Several persons were located including a physically impaired man and his wife. Everyone who did not leave or refused to do so was ordered by police to leave the area immediately for health reasons, which they did. 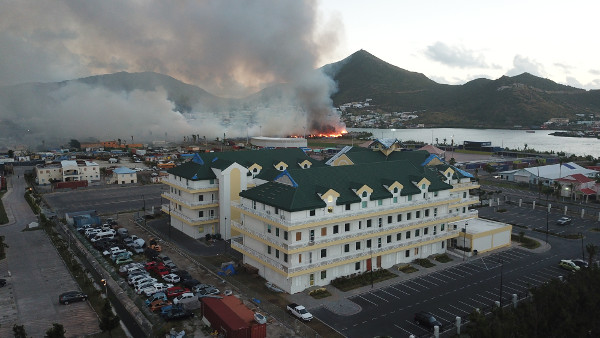 SIMPSON BAY:--- Detectives are presently investigating the shooting of man which took place in the early hours on Monday, January 5th. The incident took place in the vicinity of Scotia Bank/Simpson Bay Yacht Club and Marina. According to the victim, he was offered a lift after leaving a sports bar by two unknown men who were driving in a small car. After arriving at his destination the two men demanded money from him. After telling them he had no money he was shot by one of the men in his left hand. The victim then ran towards the security booth of the yacht club from where the police were notified. Paramedics treated the victim on the scene and then transported him to the Sint Maarten Medical Center where he remains for further treatment and observation. The Forensic department was also called in to collect evidence left at the scene.

SIMPSON BAY:--- On Monday at approximately 07.00 a.m. police, detectives, and paramedics were sent by the Emergency Dispatch to an apartment building located on Peterson Drive in Simpson Bay to investigate a case involving a man that was lying on the ground and was not showing any signs of life. On the scene, the investigating officers encountered the lifeless body of the victim. According to a witness the victim is staying on the second floor of the same apartment building. Another witness stated that the victim and he had gone out the night before to watch a game at a sports bar. The victim had too much to drink and was quite intoxicated. He could not get up the stairs by himself and was too heavy to help go up the stairs. The victim was left sitting on the stairs to sober up. A medical doctor came to the scene and pronounced the death of the victim. It is still unclear what the exact cause of death is at this time and there are no signs of foul play. The investigation is ongoing.