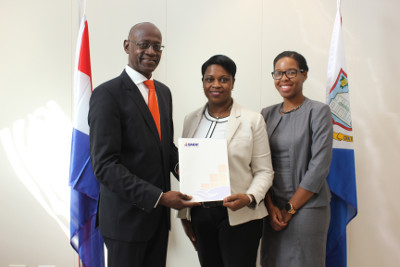 PHILIPSBURG:--- Culminating the closure of its financial year 2017, St. Maarten Development Fund (SMDF) presented its unaudited financial statements and management report for the year 2017 to Prime Minister and Minister of General Affairs Leona Romeo-Marlin. In the meeting with Prime Minister Romeo-Marlin, SMDF’s Managing Director Keith Franca and Program and Development Makhicia Brooks presented the Prime Minister with the Fund’s financial statement and also briefed her on activities of 2017 as well as the Fund’s plans for 2018. The Fund’s financial statements, which showed SMDF’s grant-making activities totaling some ANG 3 million between 24 NGO clients was welcomed by the Prime Minister who indicated that she kept abreast of SMDF’s activities. To the NGO clients active in its five thematic areas, SMDF disbursed ANG 1,290,427 towards Youth Development, ANG 998,361 in the area of Social Care, ANG 403,654 towards Senior Care, ANG 112,105 towards Poverty Alleviation and ANG 208,111 towards Gender Support.
In speaking of the NGO clients, Franca and SMDF Program and Development Manager Makhicia Brooks described the invaluable contribution to the organizations and the caregivers working within those organizations. Brooks described the efficiency of the NGO’s operations and their adherence to SMDF’s accountability requirements. In explaining the process to be able to present the Fund’s financial statements in the first month of the year, Franca detailed the organization’s monthly reporting requirements that allowed for transparent accounting of funds granted. Moreover, Franca described the value of having in house Financial Administrator Jennai Marlin who oversees accountability of funds disbursed to the Fund’s NGO clients.
SMDF’s briefing of the year 2017 also updated the Prime Minister of the partnership with Windwards Islands Bank which began in August 2017 and the status of SMDF’s Elderly Project which began home repairs in December 2017. Franca provided the Prime Minister with the background of the project which has been made possible via funds made available by the Dutch Government in 2016 and in December 2017 following the passing of hurricane Irma. Closing out the meeting, Franca reiterated SMDF’s commitment to continue to provide quarterly updates of the Fund’s activities and thanked the Government of St. Maarten for its continuous support since SMDF’s inception in May 2012.