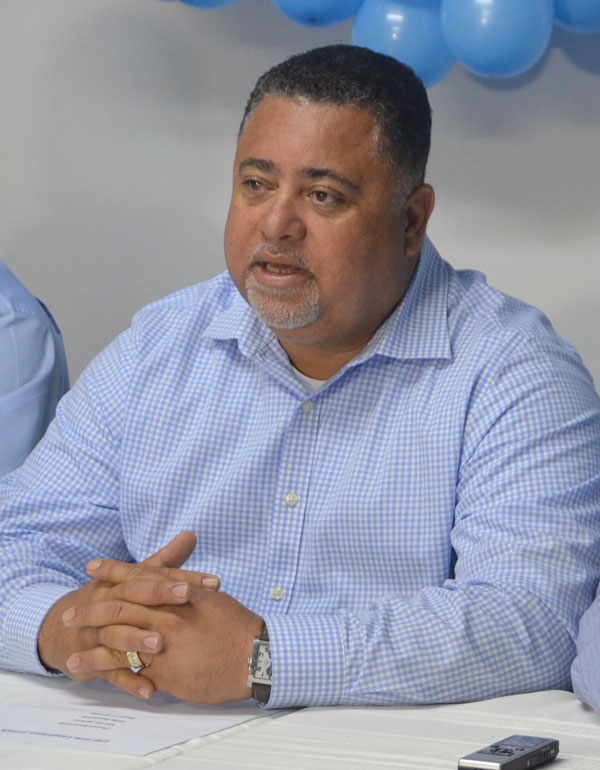 PHILIPSBURG:--- Leader of the United St. Maarten (US) party MP Frans Richardson on Wednesday said the Minister of VSA Emil Lee should be held fully accountable for his failure to properly organize the relief effort following hurricane Irma.
Richardson said he cannot understand how the media have not attached accountability where it should go instead of letting Lee throw civil servants from his Ministry under the bus as the failures. The public, the MP continued, will soon know the extent of Lee’s failures and his efforts to wash his hands from providing an acceptable and effective relief distribution program for the people.
In parliament on Wednesday evening, Richardson chastised the Democratic Party MPs for not calling their own Minister to Parliament to question him about the relief efforts. “He failed! And he failed miserably. You want to fool the people by letting them believe the relief and aid was the task of the Prime Minister. It was the responsibility of your Minister. Why was he not called in front of Parliament for questioning? But no, the Prime Minister had to be painted as the bad one. Tell the people the truth! To this day there are containers with water and food not distributed. The Minister of Labor and VSA Failed. Plain and simple,” Richardson said.
“He was responsible for everything, the organizing, distribution, vouchers etc. It became so unorganized and hectic, the governor had to step in early on and attend a meeting with Lee and his staff. In this meeting Lee carefully did not make any statements, he deflected all questions to the people under him and washed his hands. He hides under civil servants and lets the civil servants take the blame,” Richardson said.
The MP said the distribution was so chaotic at times, it took Cabinet TEATT to take their own initiative to arrange relief supplies for people in hard to reach areas. “You have to lead. All of this time where was the Minister? In hiding washing his hands of his task,” the MP said.
MP Richardson added that Lee, as a member of the Council of Ministers, let the public buy into a narrative created by his party leader, creating the impression that the other Ministers was against aid or denied aid.
“I want our people to remember that Emil Lee is a Minister. As part of the Council of Ministers, he could easily come out and speak the truth. Did the Council of Ministers make any decision turning down aid from Holland? Did the Council of Minister take any decision not to give aid to the people? In both cases, the answer is no. But Minister Lee and his party leader would rather people buy into a fake narrative that they created to destabilize government.
“He is a failure. And the fact that the relief distribution effort was problematic, should be laid entirely at his feet,” Richardson concluded.