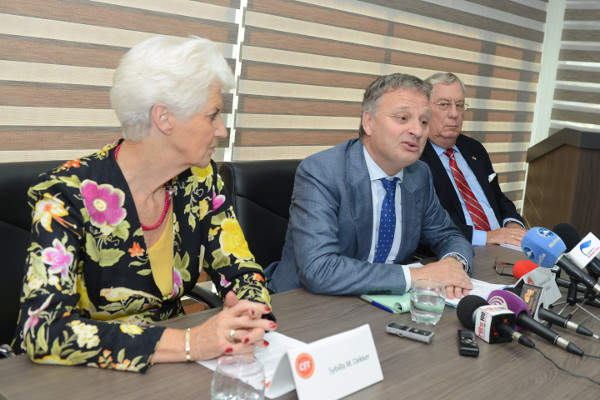 ORANJESTAD, Aruba:--- The Board of financial supervision Aruba (CAft) considers the compliance with the budgetary norms for 2017 and later years crucial in decreasing the government debt of Aruba and making the public finance sustainable. This is what Raymond Gradus indicated during his first visit to Aruba as CAft chairman. For 2017 a strict supervision is essential to comply with the projected measures to reduce the financing deficit. Considering the results of the first half year, CAft is concerned about the disappointing income and increasing expenses. In addition, the CAft has insisted during its visit to present the 2018 budget as soon as possible to Parliament, in which the norm of 0.5% GDP surplus stated in the LAft has been taken into account.

2017 Budget under pressure
Over the first half of the year, Aruba has realized a deficit of 1.6% GDP. The surplus of the collective sector excluding the Country shall result in 0.1% GDP for the whole of 2017. This means that the deficit for the Country of Aruba has to decrease from 1.6% GDP to 0.6% GDP in the second half of 2017. The Country of Aruba thus faces the challenge to realize a surplus of 1.0% GDP (approximately AWG 50 million).

Although the mid-year realization of the wage tax and the tax on business turnover (BBO) are higher than the revenues over the first half of 2016 were, they still are lagging behind compared to the budget. Furthermore, a number of cost items show a faster expending pattern than the previous years. The lagging tax revenues are greatly caused by the delayed work activities with regard to the re-opening of the refinery.

The tax revenues that are lagging behind this year also represent a risk for the 2018 budget, considering the fact that Aruba has to achieve a financing surplus of 0.5% GDP in 2018, according to the LAft. Without highly increasing tax revenues, not only in 2017 but particularly in 2018, it will be precarious to comply with said norm. The CAft has not received the draft 2018 budget from the government. During its visit, the CAft has insisted that the 2018 budget be submitted as soon as possible to Parliament, so that the budget can be adopted in time. This is important, considering the financing schedule.

Importance of durable public finance
Compliance with budgetary norms is important in order to reduce the government debt. The substantial burden of debt lays a great pressure on Aruba’s public finance. Because of the high indebtedness combined with a relatively high-interest rate, the annual interest charges represent enormous costs for the Aruban government. It is important for Aruba to reduce both the interest costs and the debt quote. In that respect, the government bonds that were refinanced in 2017 are a step in the right direction, as these were financed against a lower interest rate. But a further decrease of the debt quote and the lower interest costs associated herewith are a prerequisite to lead the public finance to a structurally sustainable path. In 2018 a first step needs to be taken towards the realization of a further improvement of the government debt, with a surplus of 0.5% GDP. Also after 2018, a surplus is required to achieve a further improvement of the government debt.

Visit of CAft with new chairman
The two days visit of the CAft to Aruba was the first headed by the new chairman Mr. Raymond Gradus. The CAft now consists of Raymond Gradus, Robert Croes and Sybilla Dekker. The new chairman looks back on a fruitful visit to Aruba. The CAft had its regular meetings with the Governor, the outgoing Minister of Finance, the outgoing Council of Ministers and the Parliamentary Committee on Finance, Economic Affairs and Government Organization. In addition, the CAft has visited amongst others the Central Bank of Aruba, the Advisory Council and the Aruba Ports Authority.