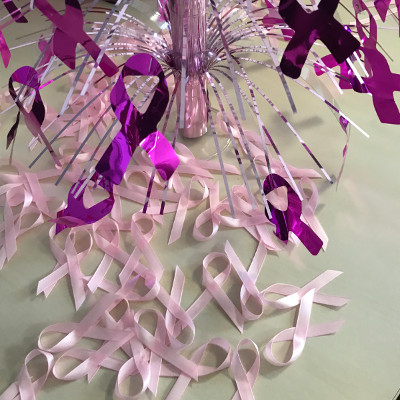 POND ISLAND:--- TelEm Group is not allowing the effects of two devastating hurricanes to get in the way of the company’s annual Breast Cancer Awareness campaign that brings attention to personnel and the general public about the dangers of an equally devastating disease.

Each year TelEm Group focuses on the campaign by participating in various Breast Cancer Awareness events, and by decorating the company’s lobby area in the main building on Pond Island to stimulate public attention and reaction. The company has also sponsored various Breast Cancer Awareness efforts in the community in past years, including a sponsored cycle ride and a march through the Philipsburg area.
Starting Friday, October 6th, TelEm Group’s Commercial team will be distributing pink ribbons to staff and also to members of the public for them to wear.
Staff is also being asked to wear something pink each Friday to further bring attention to the campaign cause.
In the middle of the month, the team is planning to hold sessions with male and female members of staff to talk about breast cancer and how the disease affects individuals and families.
“TelEm Group has a large number of women in employment to whom this kind of information can be very useful, but it will also be useful for all men in the company who want to better understand the disease and the support role they can play with their loved ones and others in the community with Breast Cancer,” said TelEm Group Manager, Marketing & Sales Grisha Marten.