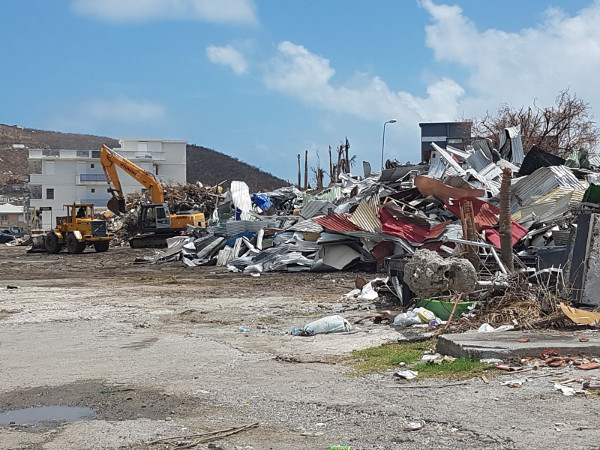 PHILIPSBURG:--- Residents on the Dutch side of St. Maarten are crying out loud for the lack of basic food supplies two weeks after hurricane Irma ravaged the island. While the people had to put up with tropical storm conditions during the passing of Hurricane Maria on Tuesday way before they were able to bounce back from the damages caused by Irma.
On Tuesday as residents stayed indoors as Maria drenched the island with more winds and water, their major complaint was two weeks after the passing of Irma they are yet to receive any type of relief items from government and those volunteering. Areas such as Belvedere, Sucker Garden and Cupe Coy were completely forgotten.
On Tuesday many of the residents called in on Laser 101 to complain, those mostly hindered are the disabled, elderly and young mothers since they are not able to join the long queue in different areas to collect basic food supplies that are being distributed by the marines.
Irma, the most dangerous hurricane to hit St. Maarten after hurricane Luis in 1995 left many homeless and most homes without roofs, yet those distributing relief supplies did not see the need to hand out tarpaulin as the people braced for Maria.
While hurricane Irma ravaged the island, those that caused more destruction are the very people that are complaining today because they chose to participate in the looting that took place for days after the passage of hurricane Irma. Several businesses such as supermarkets, clothing stores, hardware stores, pharmacies, jewelry stores and other businesses were ransacked by looters. Some businesses that did not sustain damages from Irma were damaged by the looters. Indeed, it is the looters that have caused more damage to St. Maarten/St. Martin than the hurricanes themselves. Many of the businesses that have their doors closed simply cannot open because of the severe damages caused by the looters.
While several countries have pledged to help St. Maarten with relief supplies government has to plan how they will distribute a fair amount of supplies to each household. The Minister of TEATT Mellissa Arrindell-Doncher has been busy trying to distribute the little supplies she managed to secure to those persons that contact her for assistance. The director of STA Rolando Brison is in Europe coordinating relief supplies and evacuations. Brison has become the face of St. Maarten while Ministers that hold key portfolios are hindering the process of rebuilding.
The government failed miserably by declaring a state of emergency too late, and instead of finding ways of helping their people they are busy bickering. Civil servants that had to work tireless hours during this major crisis felt that there was too much political interference during the first days after Irma passed. However, the Governor of St. Maarten drs. Eugene Holiday rolled up his sleeves to assist with emergency evacuations and other much-needed services to his country. 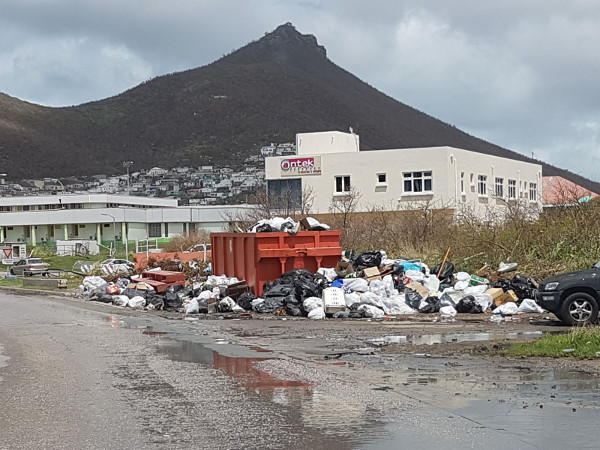 So far those minimarts and supermarkets that were not damaged are able to open their doors for business. Some hardware stores remained closed as they are waiting on their insurance adjusters to assess their businesses, gas stations are slowly reopening even though their places of businesses suffered damages. The healthcare chain is back up and running some of which include the St. Maarten Medical Center (SMMC), general practitioners, pharmacies, dentists, the SLS laboratory services. GEBE is busy restoring power to several areas but they seem to be load shedding. Water supply in several areas has also been restored even though four of the water tanks have been totally destroyed by Irma while four others suffered damage to their roofs.
While residents are complaining about the lack of supplies and services they too have failed to assist in restoring the island. Household garbage is dumped among the debris left behind by hurricane Irma. Up to Monday the island began smelling as garbage are piled up in several areas on the Dutch side. Well Road, a major example as half of the narrow road is taken up by debris and household garbage.
On the French side of the island some residents have joined hands and cleaned up their neighborhoods, one area that did not wait for elected officials/ government to clean up their area is Quartier d’ Orleans (French Quarter) as public spirited residents took to the streets and began the clean-up process with the owners of heavy equipment. EDF is yet to restore power to several areas, it is understood that EDF is having problems connecting to its network since several high tension cables have been damaged. It is also understood that EDF will do its best to restore power through out the French side within one month after the passage of Irma. SMN News was told that management of EDF plans to install several generators throughout the island if they are not able to connect to their network.
Food and water are being distributed in limited quantity by the gendarmes, distribution takes place at several points throughout the French side of the island. Internet maybe a thing of the past the providers have to wait on France Telecom to restore phone lines in order to provide internet services.