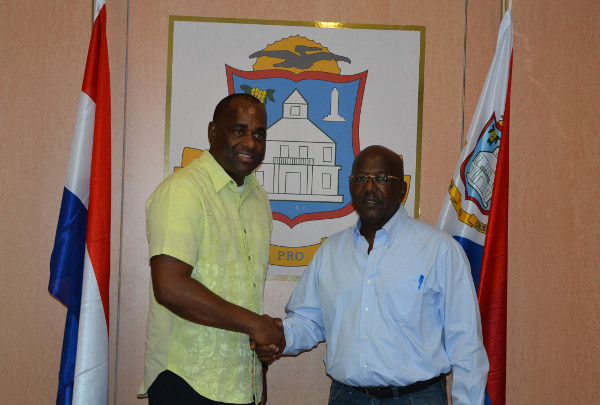 The Dominica Prime Minister said that he had to come personally to express sympathies to the government and people of Sint Maarten, because of the longstanding bond and friendship with Sint Maarten.

The Prime Minister expressed the willingness of his government to assist with water, dry goods and sometime next week, a shipment of provisions, plantains, and avocados will also be sent.

Sint Maarten’s Prime Minister gave a brief overview of the damage sustained and explained some of what was done already and what is still ongoing. He then thanked the Dominica Prime Minister on behalf of the government and people of Sint Maarten.

On Sunday morning Prime Minister Marlin also received a courtesy visit from the Chinese Consul general stationed in Curacao.
The Consul said he immediately got approval to cut short his vacation in order to come to Sint Maarten to see firsthand the damage that was caused by Hurricane Irma.
He expressed sympathies to the people and government of Sint Maarten on behalf of the Chinese government.
He said that he had briefly met with a group of Chinese business people on the island and they all expressed that they will stay on the island and contribute to the rebuilding.
About 28 Chinese citizens, among them several expecting mothers and newborns left the island for a short period.