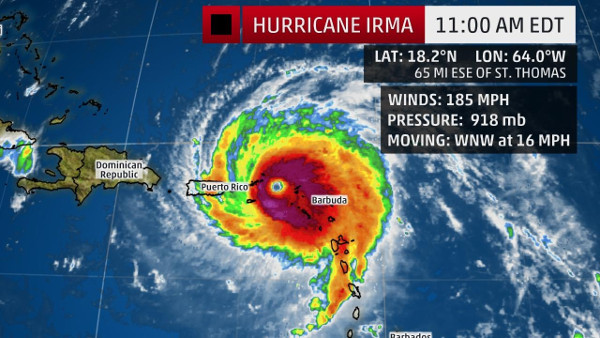 Hurricane Irma, a dangerous Category 5 hurricane, is currently blasting the islands of St. Martin and Anguilla. Irma is now heading toward the Virgin Islands, Puerto Rico, Hispañola, the Bahamas and Cuba before posing a serious threat to Florida and parts of the Southeast beginning this weekend.

Irma first passed over Barbuda, an island of 1600 residents, with gusts of at least 155 mph overnight into Wednesday morning. Early Wednesday morning, the eye of Irma then moved over St. Martin and Anguilla, where sustained winds of 117 mph were measured.
Irma became the strongest hurricane in the Atlantic basin, outside of the Caribbean Sea and Gulf of Mexico, on record on Tuesday morning, according to the National Hurricane Center.
Below is everything we know about Irma right now, including its latest status, along with potential forecast impacts in the U.S. and the Caribbean Islands.

Irma's Latest Status, Timing
The center of Irma is located around 15 miles east of St. Martin and 15 miles west-southwest of Anguilla and is moving west-northwestward at about 15 mph.
Irma moved directly over the island of Barbuda between 1 and 2 a.m. AST, bringing sustained winds of 118 mph before the anemometer broke. Pressure dropped to 916 mb before the barometer on the automated station also broke. A storm surge of about eight feet was also recorded.
Irma's maximum sustained winds are steady at 185 mph based on data from NOAA and Air Force Hurricane Hunter aircraft. Based on wind speed, Irma is the strongest Atlantic hurricane since Wilma in 2005 which also had maximum sustained winds of 185 mph.
Additionally, Irma is just the 5th Atlantic hurricane to have maximum sustained winds of 185 mph or greater, according to Dr. Phil Klotzbach, a tropical scientist at Colorado State University. Hurricane Allen occupies the top spot with 190 mph winds in 1980.
Hurricane warnings have been issued for the northern Leeward Islands, Puerto Rico, the Virgin Islands, the northern coast of the Dominican Republic, the southeastern Bahamas and the Turks and Caicos Islands. This includes Antigua, Barbuda, Anguilla, Montserrat, St. Kitts, Nevis, Saba, St. Eustatius, Sint Maarten, St. Martin, St. Barthelemy, Guadeloupe, Vieques and Culebra.
Additionally, a tropical storm warning is in effect for the southern coast of the Dominican Republic from Cabo Engano westward to the border with Haiti.
A hurricane watch is also in effect for the north coast Haiti from the border with the Dominican Republic to Le Mole St. Nicholas, Cuba from Matanzas Province eastward to Guantanamo Province and the central Bahamas.
Low wind shear, increased mid-level moisture and ample oceanic-heat content favor that Irma will remain a powerful hurricane (Category 4 or stronger) for the next several days, though some intensity fluctuations are likely at times. At this intensity, small deviations in wind speed will not change impacts. A direct hit will be catastrophic.
For the next five days, Irma will move west-northwest on the south side of a ridge of high pressure called the Bermuda high, centered in the central Atlantic.
By this weekend, Irma will begin to turn north in the direction of a departing southward dip in the jet stream that will set up in the eastern United States. Where that northward turn occurs will be critical for what impacts Irma may bring to parts of the southeastern United States.
Here's a general overview of the timing for impacts from Irma into this weekend.
Potential Impact Timing
Leeward Islands: through Wednesday
Puerto Rico/Virgin Islands: Wednesday-early Thursday; tropical storm force winds will arrive during the early morning hours
Dominican Republic/Haiti: late Wednesday-Thursday; tropical storm force winds will arrive Wednesday night or early Thursday
Turks and Caicos: Late Thursday-Friday
Bahamas: Friday-this weekend; tropical storm force winds may arrive as early as late Thursday
Cuba: Friday-this weekend; tropical storm force winds will may arrive as early as Thursday night
Southeast United States: This weekend into early next week, beginning in south Florida Saturday.

Forecast: Leeward Islands
Leeward Islands
Irma will make a direct hit on the northern Leeward Islands through Wednesday morning as a Category 5 hurricane, the strongest to hit that area since Lenny in 1999. Islands that are most likely to take a direct hit by the eyewall of Irma are Barbuda, Saint Barthelemy, Saint Martin and Anguilla.
Destructive winds, capable of widespread tree damage, long-lived power outages, and structural devastation can be expected. Storm-surge flooding, high surf and rip currents will also be dangers, and heavy rain could contribute to flooding and mudslides, as well.
The NHC says that a storm surge of 7 to 11 feet above normal tide levels is possible in the extreme northern Leeward Islands near and north of where the center tracks. Battering waves will ride atop the surge, capable of additional damage and erosion at the coast.
Rainfall totals in the Leeward Islands may total 8 to 12 inches, with locally 20 inches in spots, especially in elevated spots.
Conditions should improve by Wednesday night.

Click here to view photos of the damage done by Hurricane Irma.