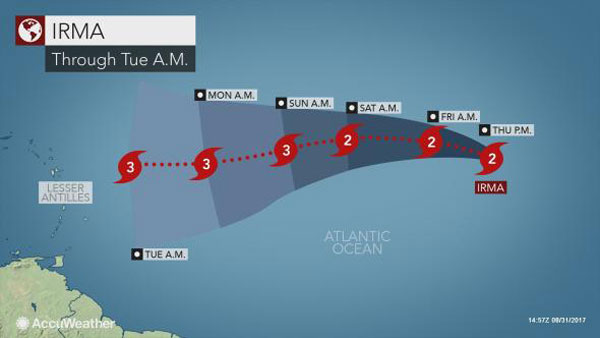 RESIDENTS of St. Maarten are called upon to monitor Hurricane Irma who already upgraded to a Category 3 hurricane. While still a long way from Landfall, Residents are asked to prepare to the first major hurricane in 22 years. Residents are asked to secure their roofs, their yards from flying debris and to ensure all their shutters are in perfect order. Lookout for expired cannot food items and most of all expiration medication.

PHILIPSBURG:---The forecasts of a busy Atlantic hurricane season are proving accurate. A Tropical Storm Irma is the new hurricane, that has fired up in the central Atlantic Ocean, the National Hurricane Center said Thursday.
The hurricane was rated a Category 2 with 100-mph winds, and it is forecast to roar into an "extremely dangerous" major hurricane over the next several days.
As of 11 a.m. ET, Irma was located about 1,845 miles east of the Leeward Islands in the Caribbean.
It poses no immediate threat to land and its eventual track remains highly uncertain as is typical for storms this far out to sea.
Irma will take about a week to trek west across the Atlantic Ocean, AccuWeather said.
Possibilities range from a landfall on the Leeward Islands in the northeastern Caribbean to the Carolinas and the island nation of Bermuda - and everything in between, according to AccuWeather.
Subtle changes atmospheric conditions, such as slightly drier air and a small patch of strong winds aloft, can cause significant fluctuations in strength in even the strongest of hurricanes.
Irma will take about a week for the system to make its trek westward across the Atlantic Ocean. Meteorologists will likely be tracking this storm through the middle of September.
"All interests in the eastern Caribbean will need to monitor the progress of this evolving and dangerous hurricane," Kottlowski said.
Static Irma Animation 1 pm
This animation shows Irma intensifying while spinning westward across the south-central Atlantic on Thursday afternoon, Aug. 31, 2017. Irma has a well-defined eye. (NOAA/satellite) 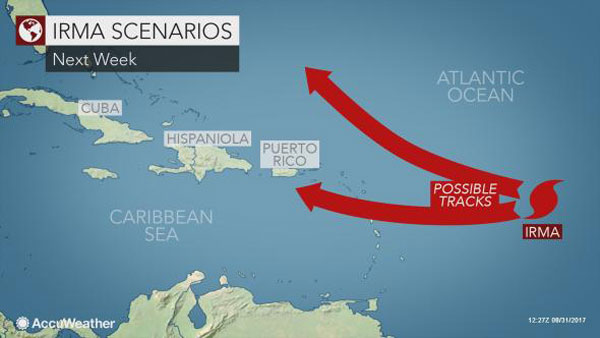 "It is way too soon to say with certainty where and if this system will impact the U.S."
During this time, plenty of atmospheric factors will come into play to determine its path.
Possibilities range from a landfall on the Leeward Islands in the northeastern Caribbean to the Carolinas and the island nation of Bermuda - and everything in between.
As of midday Thursday, Irma was located about 1,800 miles (2,900 km)east of the Leeward Islands with maximum sustained winds of 100 mph (161 km/h). “Steering winds will guide Irma close to the Leeward Islands and then perhaps Puerto Rico and Hispaniola around the middle of next week,” according to AccuWeather Meteorologist Brian Thompson.
Conditions are favorable for tropical development throughout the central Atlantic, heightening the threat of significant strengthening as this system approaches the U.S.Irma becomes a category 3 hurricane....

At 5:00 pm Hurricane Irma was located near latitude 17.3 north, longitude 34.8 west or about 1617 miles east of St. Maarten. Irma is moving toward the west-northwest near 12 mph (19km/h) but is expected to turn westward on Saturday and west southwestward by Sunday.
Maximum sustained winds have increased to near 115 mph (185 km/h) with higher gusts. Fluctuations in strength are possible but Irma is expected to remain a dangerous hurricane for several days.

The Meteorological Department of St. Maarten (MDS) will continue to monitor the progress of Irma. Members of the public are advised to monitor the updates on this system. 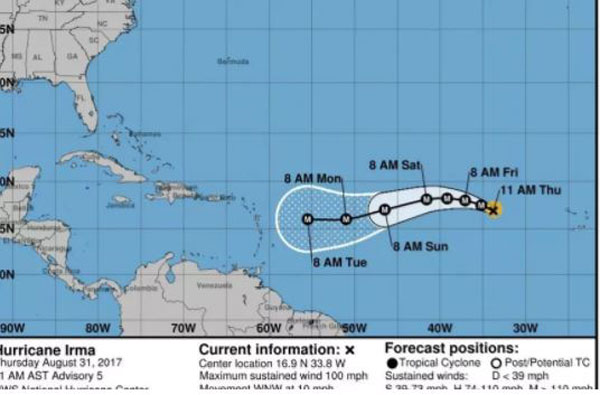 Irma has intensified into a Category 3 hurricane in the eastern Atlantic, Irma churned in open waters off the west coast of Africa, packing winds of 115 miles (185 kilometers) per hour, the Miami-based National Hurricane Center said in its 2100 GMT advisory.

A handout graphic made available on 31 August 2017 by the US National Hurricane Center NHC shows a 5-day forecast of the possible development and path of hurricane Irma
The storm is currently far from land but is heading straight towards the southern Caribbean, to the area between the US island territory of Puerto Rico and South America’s northern coastline.