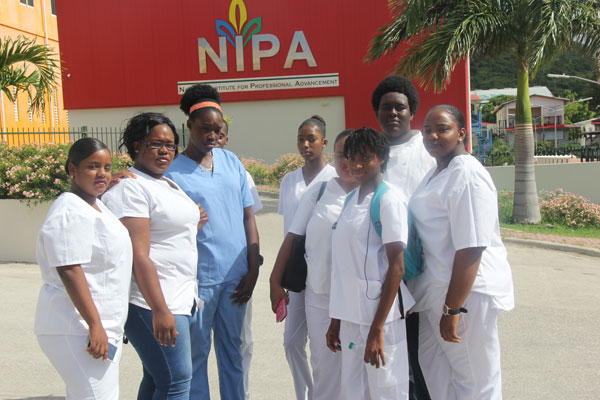 PHILIPSBURG:--- A few students from the Care classes at NIPA took the high road on Wednesday morning to denounce the statements made by NIPA board via press release on Tuesday. The students who risked being expelled from the school told SMN News that the Chairman of the Board Antonio Aventurin held a meeting last Thursday at the school and informed them that the current Director Tasheena Maccow Thomas contract will not be renewed, as she scored low in her evaluation. The students said that they asked Aventurin if there is anyone in place to replace Maccow Thomas at it was then he told them that he will be the Interim Director until further notice. The students said that during the meeting they asked certain questions and they were told that as students they do not have the right to know those things. The students said they even asked if they could speak to the media because they know for sure that the school did not conduct any evaluation on the performance of Tasheena Maccow Thomas at it was then they were told if they approach the media they will be expelled
According to the group of students that spoke out Wednesday morning said that Tasheena Maccow  Thomas have been working as a Social Worker at NIPA for the past three years and about 6 months ago she was appointed Director of the learning institution. They said because Maccow Thomas knows how to deal with students and young people, in general, they consider her their backbone and role model. The students said that Maccow Thomas was one the teachers/ Directors that would approach them constantly and asked if they needed anything such as books or materials to succeed and whenever they need she would make sure they get the materials they need in no time. Besides that, they said Maccow Thomas personally spent her own monies to pay bus fares to take them to AUC, apart from that she helped out students by giving them her own books.
The students further explained that another staff Shameeda Weeks contract was also not renewed and again when they asked questions they were denied information. As for the former executive director Patricia Lourens they said just saw her disappeared and up to this day, they do not know what has happened. They said key teachers that help to ensure that the students get their education are been sent away and this definitely is affecting them. The students further explained that they are amazed at the statements made by the board in their press release because Garfield Sargeant was not appointed Interim Director even though he was at the meeting on Thursday. The students said that Sargeant is the Adjunct Director of the school, however, they did not have much good to say about Sargeant. They said that the Adjunct Director simply does not know how to speak to students even though some of them are adults. The students went on to say some of the RN students are supposed to be writing examinations next month and the current situation at NIPA will affect those students.
Another student told SMN News that he is paying $500.00 per year for two days of the week to attend the Chef’s program and that the teachers for that program does not show up many times, yet actions are not being taken against those teachers. 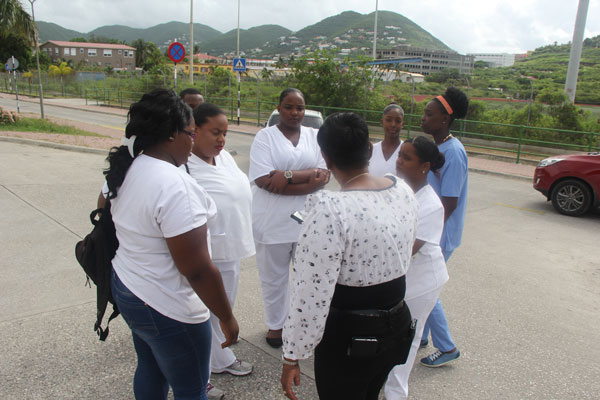 At the Council of Minister's press briefing, Minister of Education Silveria Jacobs said in her opening statements that she would not be taking any questions on the issues at NIPA, since the Inspectorate is busy looking into the matter and will report to her.
However, Minister Jacobs, an educator herself was asked that based on the performance of the students that attended the Caribbean Chef’s program if she is proud of them and if she thinks that students should be threatened or live in fear in the school environment. Minister Jacobs admitted she is proud of the achievements of all students but she would not condone issues at the school being tried in the press. She said so far she did not receive any formal complaint from the staff or the students of NIPA, neither was she informed by the Inspectorate that there was a problem. The Minister said that the situation right now is a labor issue and Human Resource of NIPA is dealing with the matter at hand, as a Minister she said she cannot get into that until she gets a report from the Inspectorate.
It should be noted that Antonio Aventurin is a close friend of the Minister of EYS, he worked in her cabinet at one time and she is the one that appointed her friend to the NIPA board.