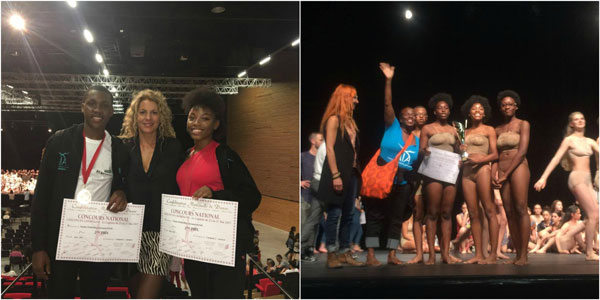 PHILIPSBURG:--- The eight competitors, head of the dance department Peggy Oulerich and Co-Director of NIA Clara Reyes traveled to France on Wednesday to compete in the Confederation National de Danse competition which featured some 4000 dance artist from around the world. Team NIA returned triumphantly on Sunday, May 28th with Gold and Silver Medals as a testament to their hard work

The venue, Le Capitol en Champagne a 12,000 square meter performance space was awash with dancers in several categories, ages and disciplines of dance from Ballet to Outré style.
Team NIA who arrived the day before competing, remained steadfast in their pursuit of excellence, delivered their best despite having to battle jet lag and train rides.
The days started at 7:30 am and ended at midnight as the individual dance artist were scheduled throughout the long day to compete at different times and on separate performance stages.
After an eventful and packed day, the dancers emerged victorious medaling as follows in choreographies from Peggy Oulerich and Clara Reyes
First Place; Gold Medal Lian Borsje
Second Place; Silver Medal Zoe van Zadelhoff
A duet from Naomi Warsop and Jeremiah David delivered second place and they were awarded Silver medal.
2nd place and Silver Medal went to a Duet performed by Zaquel Phipps and Ray Angel Simon.
Team Silver Medal went to a group dance featuring Faith Peterson, Kiara Vanterpool, Ray Angel Simon and Naomi Warsop.
“We are excited to know that our collective hard work paid off”. “And we are proud our students and their dedication to their craft”
This competition was especially poignant as this was the farewell performance competition for two of NIA stellar artists Lian Borsje and Zoë van Zadelhoff, both having been accepted to Dance Schools in the Netherlands and will be leaving this summer.
Nia is exceedingly grateful to the NIA parents who worked tirelessly to help in the fundraising effort and of the community of sponsors who’s support made this trip possible