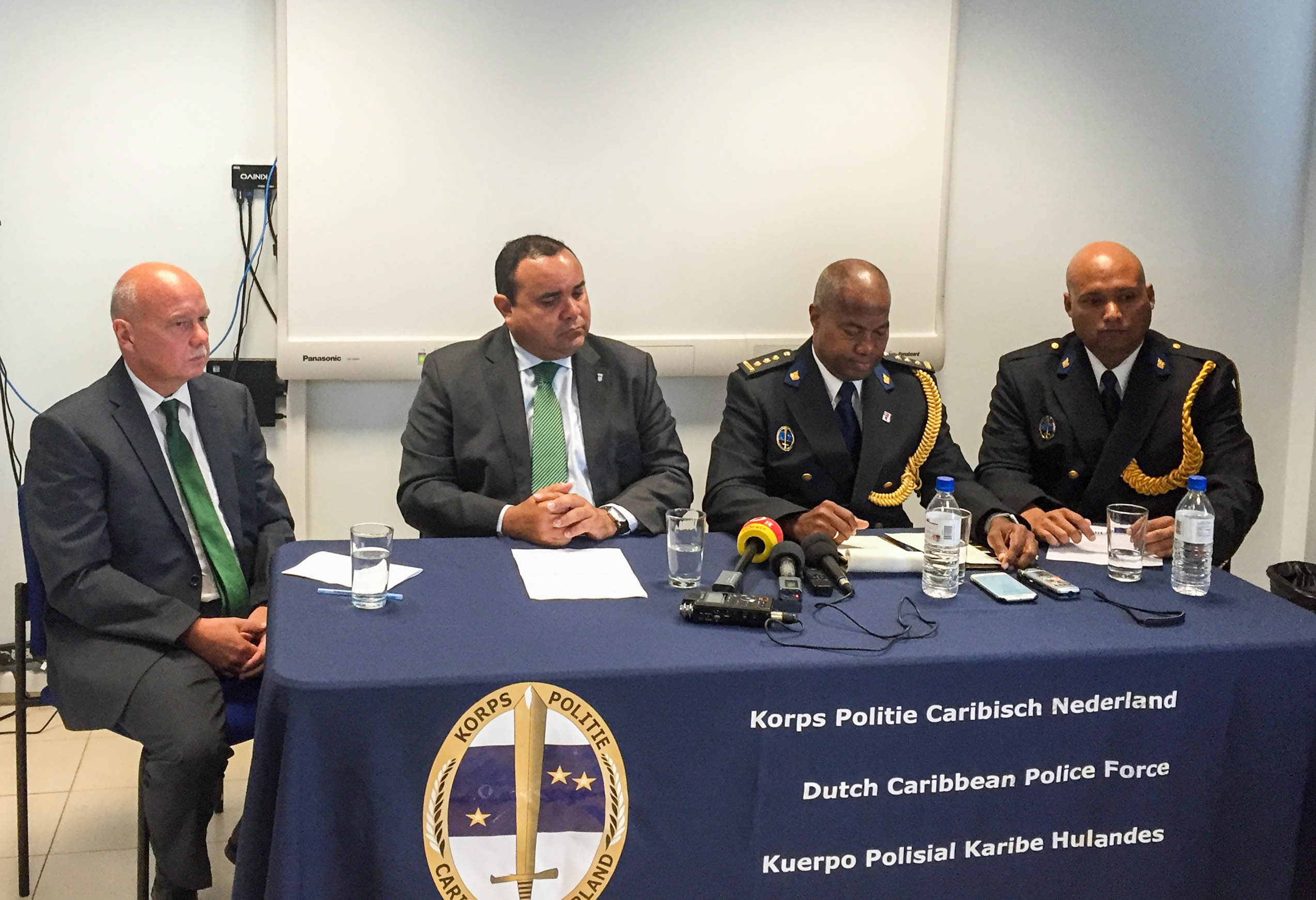 BONAIRE:--- In connection with the circulation of false news via various (social) media, on Tuesday, May 2nd, 2017 a press conference was held by the Triangle Bonaire on developments in the investigation into the death of Adriana Morales de Florencio. The case has been given the name Saturnus.
Lead Investigator, A. Braaf, gave an explanation on the time line from when Adriana Morales de Florencio was reported missing. On Thursday, April 20th the Police Station received notification in the evening hours from the cruise ship Navigator of the Seas that an employee was missing at the time that the ship was about to leave. From that moment the search began for the missing woman. This included the routine check for missing persons in places such as the hospital and other instances where persons present themselves. Also, the phone of the missing woman was tapped. During the days that followed more information came in and on the basis, thereof the search was extended and the FBI in the next port, Miami, turned to forensic investigations in the cabin of the missing woman and to questioning specific persons.
On Bonaire, the Coast Guard and STINAPA started with the search on sea and Klein Bonaire to rule out that she would have had problems at sea. The next step was to inform the parents and to contact persons who had contact with the missing woman on the ship. Starting the first weekend of her disappearance, video images were collected from companies in and outside the city center that had to be viewed one by one. This takes a lot of time. This has resulted in the missing woman being identified Friday, April 28th, in the morning with a man on video footage. The same day the man was also identified and on the orders of the Public Prosecutor's Office and the judge three house searches were executed in connection with the disappearance of Adriana Morales de Florencio, in which an illegal firearm was confiscated. Here also a suspect was arrested in connection with the violations of the Firearms Act.
On Saturday the focus was on a Kunuku (farm) with which the suspect is linked, this thru investigation of the police At the end of Saturday afternoon a research was carried out at this Kunuku (farm) where the lifeless body of a woman was found. The tattoos on her body were recognized as that of Adriana Morales de Florencio. Her parents were immediately informed and the Kunuku (farm) was closed off for further investigation. It took 12 hours before the body could be extracted from the ground because this had to be done with extreme caution in order to safeguard the investigation.
On Sunday the parents of Adriana Morales de Florencio arrived on Bonaire and were received by The Caribbean Netherlands Police Force (KPCN), the Island Governor and from that moment on Victim Support was available to them 24 hours per day. Also, a so-called family detective was appointed to at all times be the link between the Police and the family.
According to Chief Public Prosecutor H. H, the suspect was initially held for violating the Firearms Act during a search in his home. He has been detained and locked up. Afterward, the woman's body was found in a Kunuku (farm) with which he could be linked. He is now also suspected of murder/manslaughter. There were several searches done in the home of the suspect and on the Kunuku (farm).
A judicial section (autopsy) was performed on Bonaire on the discovered body. In the preliminary report, it is stated that the victim has died of violence, particularly by stabbing or cutting with a knife. Forensic investigation has yet to officially confirm that this is the body of Adriana Morales de Florencio.
The Island Governor expressed his sympathy to the family, also on behalf of the people of Bonaire. “As Island Governor I condemn these acts and in no way will we accept that the name of Bonaire is affected by crime. I ask the people to inform the police if they have any information regarding this matter. We, as Bonaireans, have to make the difference in this; we must cooperate and help Bonaire to maintain a good name internationally. The Director of Tourism Corporation Bonaire (TCB) is doing it's very best to minimize the negative impact of this case on cruise tourism. TCB will monitor all comments on social media and will give this the necessary attention '.