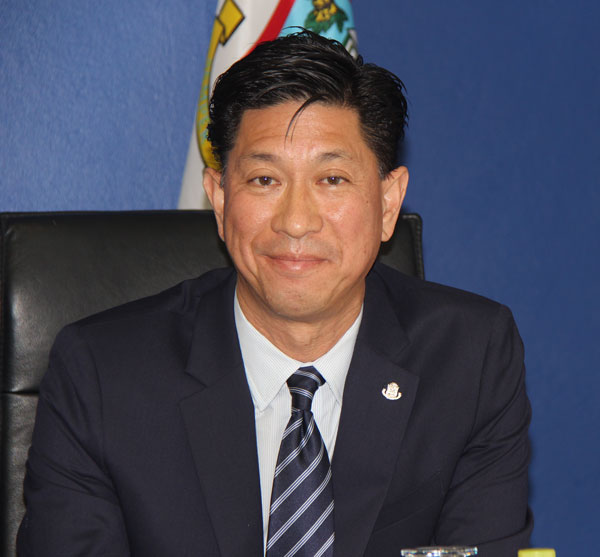 PHILIPSBURG:--- The Minister of VSA Emil Lee who recently returned to the island after visiting the Dutch Government to seek financing for the New Hospital said that he met with several elected officials. He said while the meetings did not conclude, he felt the meetings on the financing for the New Hospital was fruitful. The Minister said should the Netherlands decide to provide a loan for the New Hospital then St. Maarten Medical Center (SMMC) will save between NAF3 to 5M per year in interest.He said so far the CFT has agreed to send a positive advice to the Kingdom Council of Ministers regarding borrowing for St. Maarten to construct the New Hospital. While the Minister spent the tax payers monies to travel to the Netherlands to discuss a loan for the construction of the New Hospital, Minister Lee did not consider the current government is a demissionary government and Minister Edith Schippers (Minister of Health) is the formateur and she is also in a demissionary positon. He said he met with MP Andre Bosman and Minister Ronald Plasterk, the Minister is fully aware that Minister Plasterk informed him officially by email on May 11th, 2016 that the Dutch Government will not provide financing for the hospital.
VAMED agreement
Asked by SMN News if the agreement between VAMED and SZV is finalized and if the monies SZV agrees to pay VAMED as a settlement has been paid and which entity paid the settlement. Minister Lee said he is not updated with the finalization of the agreement since he was off island he further clarified that it is SZV that has to pay the settlement since VAMED had taken SZV to court. He said while the settlement is a “bitter pill” for him to swallow he still believes that settling with VAMED was the best thing to do since the construction of the hospital can now move forward. Minister Lee continues to say that despite the settlement the cost of the New Hospital will be about $40M less than what VAMED would charge. The Minister said while t in the Netherlands those he met with supported the project because it was done through a bidding process.

Minister Lee went on to say having a New General Hospital would provide better care for St. Maarten patients, he said the least the hospital on St. Maarten could do is diagnose patients rather than St. Maarten having to send its patients abroad for diagnosis.
IVSA and IGZ audit
SMN News further asked the Minister if he knows that the New Hospital is just a building but in order to provide proper medical care on St. Maarten the country must have qualified doctors and specialists working at St. Maarten’s General Hospital and SMMC. Asked when would the audit he Minister Lee called for will be conducted by IVSA and IGZ the Minister said that audit is in the hands of the inspectorate and that auditors from Everard van Kemenade is currently on the island conducting audits of the entire healthcare chain, starting with the General Practitioners, to the referral department at SZV.
However, the only audit/ baseline study that is ongoing at the moment is the one commissioned by the Minister through a consultant Everard van Kemenade that has absolutely no knowledge on healthcare. Just last week SMMC sent out a press release that they welcome the audit by the independent person. The other two departments the consultant has to audit is the department of Health and the Inspectorate.