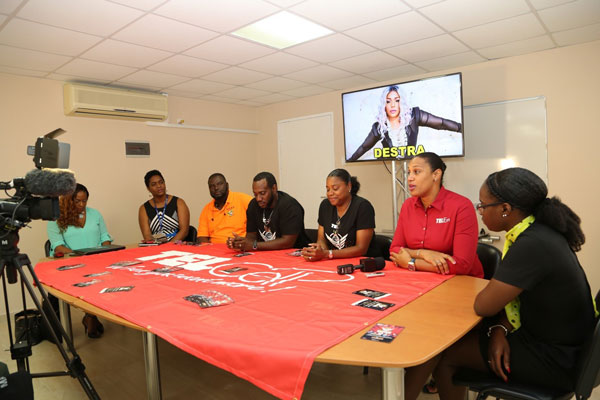 Pond Island:--- Show promoters are bringing back some of the more popular performers of the annual TelCell Night of the Hit Makers, mega dance event for the past four years so that they can make the 5th year of the event the most unforgettable yet.

Promoter, Berteaux “Mr. Rude” Fleming of Xtratight Entertainment, says bringing in this year’s line-up of musical talent is the least he can do to thank the thousands of music and dance fans who have supported him and made the event so special – even to a regional audience.

“I have gone into the archives and I have picked out the best of the best who are guaranteed to set the dancefloor in the Festival Village on fire with a big party atmosphere,” stated “Mr. Rude” during a press conference at the Festival Village as he starts to build up the hype for the April 28th Carnival event.

He said all the performers are very excited about performing before a St. Maarten audience once again and more than one of these performances have a professional undertaking to complete performances that could not be completed when they were last on the island – and they fully intend to make up for that at the Anniversary show.

During the press conference, “Mr. Rude” thanked the St. Maarten Carnival Development Foundation (SCDF) for once again branding the show as its flagship show for Carnival 2017, and also Main Sponsor TelCell, for continuing to have faith in what he is doing for St. Maarten’s music and entertainment scene.

“I want to thank some new sponsors who have come on board this year and also still thank some of the past sponsors who are not with us this year, but yet still have contributed to where we are and what we are today because they believed in what we could do,” continued Mr. Rude.

He said based on early ticket sales it is going to be another sold-out show with tickets priced at $20 and $25 dollars already sold out.

“We have tickets priced at $30 right now but even that will be for a limited time when tickets will only be available at the gate for $45 dollars, so anyone who wants to be there should get their tickets now and save some money as well,” said the Xtratight Entertainment promoter.

TelEm Group Manager, Marketing & Sales, Grisha Marten, informed that Main Sponsor TelCell will be issuing a special $10 Hitmaker Fusion 5 PREPAID card (the first of its kind) especially for the 5th-anniversary show with other show specials and giveaways to be announced at very short notice in the coming days. She says persons who purchase and activate the card will be eligible to win a Samsung J3 mobile phone. This promotion ends on April 10 and a winner will be announced immediately after.

“The offers are a great deal to Carnival music fans, but they have to keep posted to our Facebook page and to the media to know when the offers are being given so that they can act quickly or miss out,” said Grisha.