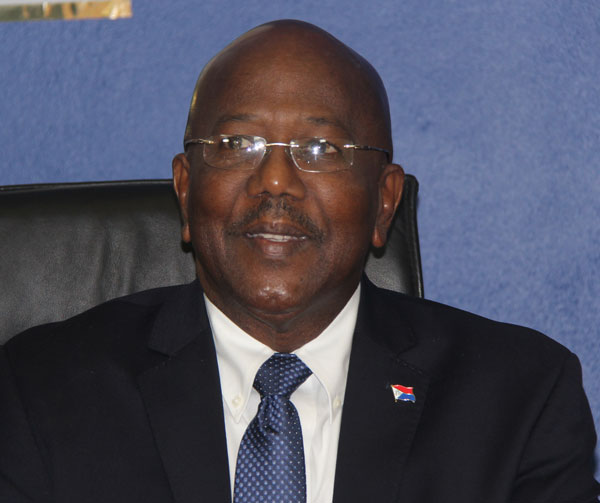 PHILIPSBURG:--- Prime Minister Marlin released the letter he sent to Minister of Interior and Kingdom Affairs Ronald Plasterk after the letter that Minister Plasterk sent to him was published in one of the newspapers.
The Prime Minister held on to his word during the past weeks when he was asked to update the people of St. Maarten on the meeting he had with Minister Plasterk in Aruba on the appointment of the quartermaster and also the integrity chamber that is to be established on St. Maarten.
Marlin did say several times that he had an agreement with Minister Plasterk not to release any information on the meeting since the meeting has to continue.
However, on Wednesday during the Council of Minister's press briefing, Marlin said since Minister Plasterk published the letter he sent to Marlin he will, in turn, gave out copies of his response to members of the media, without making further comments.
In the letter, Marlin dispatched to the Minister questioned the appointment of the Quartermaster and to prepare the integrity chamber and the threat to establish the integrity chamber through a general measure by the Kingdom Council. (AMVRB).
Marlin stated that the government of St. Maarten is astonished by the measure taken by Minister Plasterk. He referred to the protocol of 2015 which was annulled by the Constitutional Court. Marlin also stated that St. Maarten had already appointed a quartermaster and has demonstrated its willingness to establish an integrity chamber and appointing a quartermaster all of which was based on three integrity reports and its recommendations.
Marlin reminds the Minister that St. Maarten had lived up to the agreement by appointing a quartermaster while the Netherlands did not meet the July 2015 deadline. Marlin letter further states that appointing a quartermaster one and a half year after the deadline is not in line with the agreement they had, he further said it is questionable, to say the least,what the quartermaster would be preparing at this stage.
He stated that the St. Maarten Quartermaster completed his assignment and drafted a reported which is in the possession of Minister Plasterk.
The letter Marlin and report released to the media can be viewed below this article.