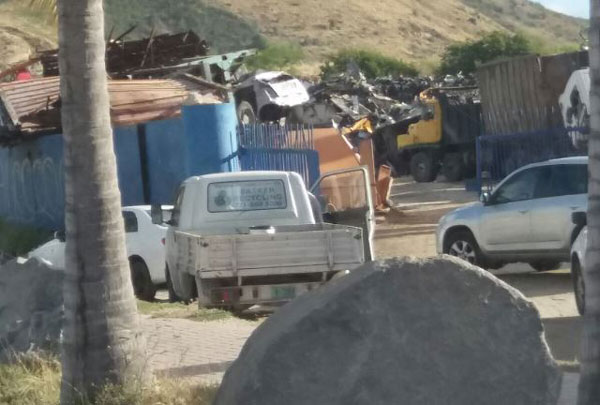 Houses are being searched in St. Maarten, Suriname and the Netherlands.

PHILIPSBURG/THE HAGUE:--- Local police are assisting the Dutch police in raiding a scrap metal yard located on Pond Island on Tuesday morning.
The investigation code name “Subervision” started in the Netherlands where four persons have been arrested after house searches. However, the investigation and searches stretch to St. Maarten, Suriname and Germany as reported in the Telegraph.
The spokesman for the Prosecutor’s Office on St. Maarten said that the Prosecutor’s Office on St. Maarten received a request for assistance but the operation is being conducted by the Dutch.
The subversion investigation surrounds organized crime where cocaine was being shipped to the Netherlands “Schoonebeek´ at a scrap metal company. The authorities in the Netherlands have been investigating the smuggling of cocaine that is packed in containers with scrap metal. The DEA already reported that there has been an increase in the coke smuggling business through the Caribbean.

In the Netherlands several investigations into the smuggling of cocaine, packed in containers with scrap. In recent years is the investigation and the US anti-drug control DEA, that there is a huge increase in coke smuggling through the Caribbean.
Police northern Netherlands on Tuesday morning raids near the town of Nieuw-Schoonebeek and here and elsewhere certainly arrested four people on suspicion of money laundering. It would be about eight million euros.