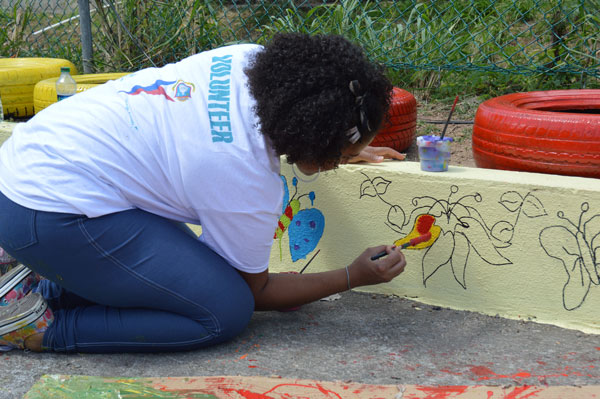 PHILIPSBURG:--- The Team behind SXM Doet is very proud to announce that this year’s 2017 event has had the largest turnout thus far with over 1,300 persons volunteering throughout the Dutch Side of the island. While a small number of projects experienced a few hiccups at their start, overall most projects ended up being a great success!

For both 2015 and last year’s edition of SXM Doet, the event brought together approximately 1,000 volunteers compared to this year’s 2017 rough estimate of a whopping 1,300 people contributing back to our island’s community over the span of two days.

A total number of 74 projects were organized respectively by 40 locally represented organizations on Friday, March 10th, and Saturday, March 11th. The projects themselves vary in their goals; some projects consisted of organizing entertaining days out for vulnerable groups. For example, groups of elderly persons were taken out for lunch at local restaurants and on tours around the island. Differently abled and physically challenged persons were taken out for a day at the movies where a custom wheelchair ramp was built for easier access to the theatre. A group of dynamic young persons also spent the morning cooking up 150 meals and the afternoon delivering them around the island to less fortunate families and individuals. Patrons visiting various supermarkets on Friday and Saturday could have also run into SXM Doet volunteers kindly asking for donations of canned goods and toiletries for a local community food pantry.

Beautifying playgrounds for children was a strong theme this year, with many playgrounds belonging to various communities and schools receiving much-needed upgrades and renovations. Murals, community gardens and establishing recreational areas for socializing were also popular projects that received a lot of outside assistance from local artists, agriculturalists, and skilled workers. Other projects included setting up of sports facilities like basketball courts, repairing feeding stations for stray animals, and general organizing of storage spaces in need of extra hands to get the job done.

SXM Doet is part of a Kingdom-wide initiative, whereby, this year, a total of over 10.000 projects were hosted with over 400.000 volunteers all giving back to their communities for just two days. The King and Queen join in, as well as Princess Beatrix, whom all physically contribute at a project every single year.

Here in St. Maarten, various Ministers, Parliamentarians, Government Departments and Cabinets, Netherlands representatives were spotted out in different parts of the community lending a helping hand.

Many businesses joined in on their own accord as well, with many requesting to contribute to the event in multiple ways. Some companies partnered with the SXM Doet Team to provide discounts and donations to all participants, and others donated their time and assistance by adopting a project for the weekend. To those entities we owe a very special thank you, since without such selflessness, SXM Doet would not be what it is today.
The SXM Doet Project Management Team would therefore like to thank: Easy Print, Firgos, Domino’s Pizza, Cake House, Divico, Heavenly Water, Greenfingers, Kooyman, UTS, R&R Tackling, RMG Designs, Viva Signs, the Philipsburg Broadcasting Company, The Daily Herald, Caribbean Legacy, Martijn Trading, Caribbean Cinemas, Smiles Inc., Buccaneer Beach Bar, and CC1.

Be The Change Foundation the executor and organizer of SXM Doet would also like to thank the Oranje Fonds for having brought the initiative to Sint Maarten and of course, for funding the effort locally and throughout the rest of the Dutch Kingdom.

For more information on SXM Doet or to learn how to contribute in any way, please contact: the Project Management Team, Melanie Choisy and Fleur Hermanides, at This email address is being protected from spambots. You need JavaScript enabled to view it. or visit www.sxmdoet.com / www.facebook.com/SXMDOET.