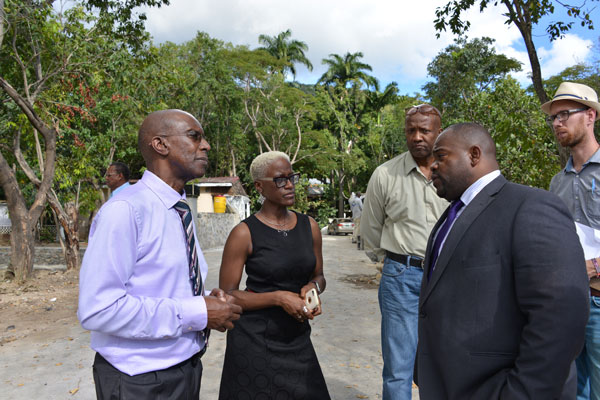 PHILIPSBURG:--- St. Maarten’s VROMI Minister Christopher Emmanuel was on Tuesday guest of the general pension fund, APS, with officials of the fund providing the minister with a tour of the Mary’s Fancy Plantation project.
The event served to update the minister on the latest developments pertaining to primarily infrastructural aspects of the projects, which are being carried out in cooperation with his ministry.
The presentation marked the minister’s first official visit to the project site, during which he was accompanied by APS chairman of the board, Franklyn Richards, project team members and members of the minister’s cabinet staff.
Following a tour of the area, minister Emmanuel was provided with in-depth information regarding ongoing and future developments related to the project, which is being executed as one of several investments made by APS.
On Tuesday, officials of APS were able to show the VROMI minister the status of the first phase of work being carried out at the Plantation, among which are the rehabilitation of the rock wall, the trench, and the construction of a new entrance and exit path to and from the estate.
Work on the wall became necessary to improve the structural integrity of the wall. And so, a cast-concrete core was created. The many piles of stones characterizing the wall over the past years, were used in the natural stone cladding that is currently being worked on. Project developers have tried, as much as possible, to restore the wall in a way that it looks like the original 18th-century design and finish of the perimeter wall, by using images from other Caribbean plantations as a guide. Improving the structural integrity of the wall was, moreover, important from a safety and security perspective. The wall now in place should stand up formidably to natural disasters, vehicular impacts and other mishaps.
Not too long ago, a backhoe could be seen at the site clearing out silt and other sediment, as part of the deepening and widening process for the nearby trench. The trench is now expected to be more capable of handling vast amounts of water known to flow downhill into the Cul-de-Sac basin. The natural stone finish ties it in nicely to the wall and the stone finish of the monuments inside on the plantation grounds.
Work on the well-known bridge structure leading to and from the plantation, as well as pedestrian sidewalks surrounding the area, are all proceeding according to plans. A one-way road meanders through the property, taking visitors from the entrance, by way of the plantation house along the trench to exit on Gladiola road.
The road is another example of where the project developers worked in conjunction with nature, as much as possible. The trajectory of the road was changed to take it around protected and less common species of trees, such as one of the imposing silk cotton trees found on the property.
Minister Emmanuel was explained how the total rehabilitation envisioned, is one that takes into consideration improvements to the characteristic monument structures of the former sugar plantation, including the plantation house, the “sugar mill” - which is a boiling house - and chimney.
The next phase of the project is the rehabilitation of said monuments. Sint Maarten has several ordinances and decrees that regulate and define the status of monuments. The legislation was updated in 2013 to comply with the new status as Country Sint Maarten.
APS officials expect this first phase of the project to be completed by the end of February.