PHILIPSBURG:--- The European Union funded COSME Programme, is launching a 3 day Small and Medium-sized Enterprise: Start and Develop Your Business (SME-SDB) “21st Century Entrepreneurship” training program in St.Maarten, in collaboration with the University of St. Martin. This training is part of a series of trainings which are also implemented in all the other 11 Caribbean Overseas Countries and Territories (OCTs).

This SME-SDB 21st Century Entrepreneurship Training Program is being coordinated by Mr. Prakaash Rostam, Key Expert SME & Private Sector Development Specialist, and the workshops are facilitated by the international trainer Mr. Erwin Wolthuis. The partner involved for this program is the University of St.Martin (USM). This approach is to create a sustainable structure, giving entrepreneurs the opportunity to develop their skills and broaden their knowledge on 21st century entrepreneurship.

Mr. Rostam emphasizes that institutional capacity building is as an important ingredient for the sustainability of entrepreneurs. He identifies the combination of knowledge and skills in business development & management as a key factor for every entrepreneur. “As the playground for entrepreneurs is getting more global, we should be aware of the global rules of this game of entrepreneurship” he states, being an International Trainer and Business Development Consultant.

Dr. Francio Guadeloupe, President of the USM added that traditionally St. Martiners have been workers-entrepreneurs. They may have been employed in a hotel or restaurant, but usually had, what was called “something on the side”. This “something on the side” was chairs that they rented to tourists, catering that they did in the weekends, or say a car rental of 3 cars. This was the St. Martin spirit. Now besides this work ethic, St. Martiners also put a premium on education and being informed about world affairs. The USM is teaming up with COSME to revive and update this tradition for our modern times. This is an open invitation to all St. Martiners who still believe in having that “little something on the side” and more than that, namely, cultivating it that it may become “the thing that provides most of the bread on their table”.
“Knowledge is power, skills are your tools, so why not choose to conquer this world by creating opportunities for all, through entrepreneurship” Mr. Rostam concludes.

This first course, which will be held on the evenings of February 13, 14 and 15; from 5.30 till 9.00 pm, has a limited availability. Interested (prospective) entrepreneurs can register by contacting Mr. Erwin Wolthuis (Tel.: 5860437 or Email: This email address is being protected from spambots. You need JavaScript enabled to view it.) Registration will follow the first come – first served principle. 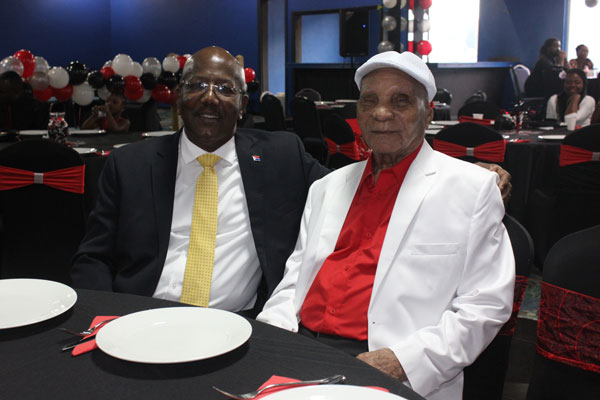 PHILIPSBURG:--- He was a century not out, until a few days later, he was caught with a leg spin by death. George Frederick Adolphus York, the patriarch of the York family, was in good spirits when we all came together to celebrate his 100th birthday. I was fortunate to be part of the celebration, both in church and at the Tropicana Ballroom. It is therefore with utter disbelief that I received the news of his passing.
I recall mentioning on the day he turned 100, two personal experiences with him which have followed me ever since. The first was going whelking with him and the late Amos Richardson many rains ago. We used to walk from Middle Region to Oyster Bay, on the reefs where the Westin Resort and Spa is now located. Anyone who knew Mr. Freddy York, would know that such a distance was really a short stroll for him.
Looking back at those days, I think they may have allowed me to tag along with them so I could carry their bag. Whatever the reasons may have been, I count myself lucky to have had the opportunity to share the same space and joy with them. The whelking lessons were for me an excuse to be in the presence of two wise, older St. Maarteners, who had a singular and contagious joie de vivre.
In more recent times, I had once stopped to offer Freddy a ride when I came across him on one of his daily walks. He was going back home from Town. As I pulled the car next to him, he looked at me and said, “Young man, you are taking me off my routine, but I won’t disrespect you.” He then hopped into the car and I drove him home.
I am sure many other people, whose lives he impacted in his simple, quiet way, would tell of their own memories of him, whether as a seasoned, and avid domino player or as one who loved to tell jokes.
But at times like these, we are usually lost for words. Let me, therefore, borrow from novelist Isabelle Allende, who wrote: “People die only when we forget them,' my mother explained shortly before she left me. 'If you can remember me, I will be with you always.”
George Frederick Adolphus York will surely be with us always, because we will always remember him for his simplicity, his discipline (for it takes tremendous discipline to exercise as he did daily) and his immense sense of humor.
To all the entire York family, and in particular, to Henrietta Doran-York, our Minister Plenipotentiary in The Hague, and to all the children, grandchildren, great-grandchildren, and great, great grandchildren and the relatives and friends he left behind, please accept heartfelt condolences from my wife Gabrielle, and me and our family as well as on behalf of the Government and people of St. Maarten.
We pray that you will find strength and comfort in your faith during this time of grief and take solace in the words of author Joseph Campbell who said: “To live in hearts we leave behind is not to die.”
Freddy will continue to live in our hearts until we meet again.
May his soul rest in eternal peace.