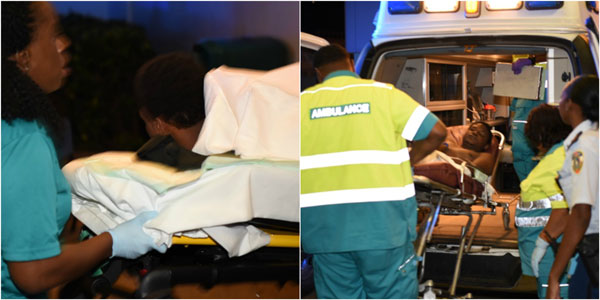 COLE BAY:--- Police shot at least two suspects that robbed FAI WONG Restaurant on Wellington Road Cole Bay shortly after 9pm. Police Spokesman Ricardo Henson said a number of police patrol responded to the scene after they were called by the victims. Henson said when the suspects (at least four) of them saw police they began fleeing by foot. The police spokesman said police fired shots and two of the three suspects that were captured have been shot. He said the suspects were treated by ambulance personnel and were transported to the St. Maarten Medical Center for treatment. SMN News will update this article when more information becomes available.

Armed robbery two suspects shot
The Special Unit robbery is investigating an armed robbery which took place at Fai Wong Restaurant located on the Wellington Road in Cole Bay. The first call came into the 911 Dispatch at approximately 08.40 p.m. with the information that three armed and masked men had stormed into the establishment with their weapons and threatened the cashier and the clients. The suspects then robbed the establishment and also the clients of their belongings. After committing this act the suspects fled on foot. The emergency dispatch was immediately called and several police patrols were sent to the area to search for and apprehend the suspects in question. The first police patrol on the scene identified three suspects trying to flee in a small white Suzuki jeep which was parked nearby. When the suspects realized that the police had them in sight and were being chased, they jumped out of the vehicle and tried to flee on foot. This is when the police fired numerous shots at the suspects. One suspect could not leave the scene because he had been shot. The other suspects fled on foot through the area. During a search of the area by police found two other suspects which were found hiding behind a building, one of which also shot. These two suspects were also taken into custody. The two injured suspects were treated on the scene by paramedics and then transported to the Sint Maarten medical Center for further treatment. The area was immediately closed for the Special Unit Robbery to interview the victims and potential witnesses while the Forensic Department collect evidence. The two suspects who were treated at the hospital have been admitted for observation and further treatment. The third suspect has been detained and remains in custody. The suspect Suzuki jeep was confiscated for further investigation.
The investigation is in its early stages and when more information becomes available the media will be informed.