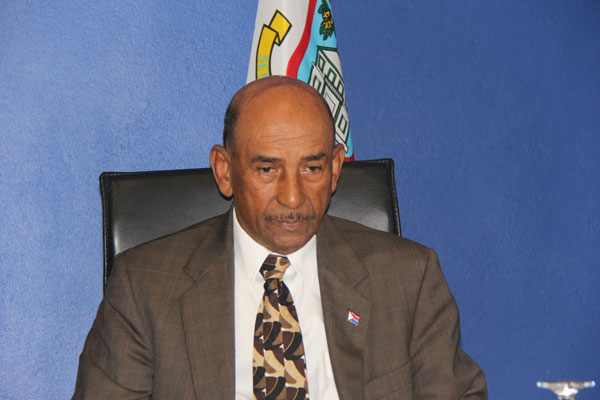 Netherlands and Curacao threw a monkey wrench in the division of assets process.

PHILIPSBURG:--- The Minister of Finance Richard Gibson Sr. told members of the media on Wednesday at the Council of Ministers press briefing that he held meetings with the managements of government-owned companies intensively over the past weeks and these meetings are continuing. He said that the idea behind these meetings is to set a new path based on the integrity reports that stated that government owned companies are government owned by the government.  Gibson said in those reports recommendations were made where the government has to resort itself and regain control over its companies to ensure they know what takes place within these companies.
The Minister said in the past the government-owned companies would make their budgets and plans for investment before paying the dividends that are due to the shareholder. He said that management of the government-owned companies would just think about their “bells and whistles” all of which costs money and after they get all of what they would like then they would see what is left to pay their dividends. Gibson said during the meetings he held with the management of these companies he made clear to them to starting thinking on reversing their paths and live up to their obligations towards government and its shares through profits. He said the management of those companies has a duty to generate profits that have to be shared.
Gibson said over the years the PJIAE and Harbor have been charging a departure fee with the approval of government all of which they pocketed for the maintenance of facilities and those that are using those facilities must pay. The Minister said that PJIAE started with a $5.00 departure tax which today mushroomed to $36.00 per person. He said that these companies generate an astronomical amount of monies just based on a regulation and not the production of profits, this he said also created inefficiencies in these companies. He said based on his research he could not find one island or country that does not get the departure taxes that have been collected. He said the monies PJIAE and the Harbor have been collecting just goes to the “building up of the Airport and harbor.” He made clear that the time has come for all of that to change because these things have been affecting government. Gibson said the government has to continuously make cuts in order to balance its budget and even postponing things while actual monies that government is entitled to are being retained by the two main companies. For now the government wants NAF12.00 per person and as such they are working towards putting a legislation in place which has to go to parliament in order for government to collect its share of departure taxes because government also has facilities to maintain such as roads that are being used by the visitors. He said the amount government is going to collect is very small compared to what other countries have been collecting. He made clear that while the two companies have been making excuses, they would have to find a way to make their payments to government as long as the necessary law is put in place.

Government ended up with surplus in 2016, plus the NAF20M reserves.

Minister Gibson said that the country St. Maarten ended up with a provisional surplus of NAF1.1 million guilders. Gibson said St. Maarten encountered lots of issues during the year 2016 but government managed its budget in such a way that they were able to accumulate a surplus in 2016.
Besides the NAF1.1M Gibson said that government had to put aside NAF20M to pay off its debts, therefore government has from the year 2016 Naf. 21.1M on its account as extra revenues.
Gibson said when he took office in November 2015 government had a backlog of NAF 191M in backlog debts. He said currently the way things are looking that debt with be reduced to NAF 50.8M in 2017 which means government is heading in the right direction when it comes to regulating its financial issues.
Gibson also said that St. Maarten does have risks and some problems since the Turnover Tax (TOT) dropped in 2016 by NAF.7M. He said this had to do with the economic situation on the island, thus has very little control over since it relates to the economy amongst other issues. He also said that government is busy putting a team together who will be knocking on people’s doors to ensure that the residents have paid their paid their TOT and wage taxes or they filed properly. The Minister of Finance said the Ministry of VSA is busy checking on businesses to ensure they pay the wage taxes for their employees. He said that the tax department will be sharing information with the various department in order for them to curb the irregularities within the community. One example the Minister gave is the risks businesses will be taking by hiring unregistered persons, businesses that are caught with illegals working for them will spark an audit since these businesses are not adhering to the laws of the country such as not paying the wage taxes and other obligations. He said the team is being put together whose main aim is to eliminate cheating and or identifying situations that should be rectified in order to get the citizens of the country to be compliant in all areas.
Netherlands and Curacao throw a monkey wrench in the division of assets --- St. Maarten is prepared to go court to collect what is due to the country.
Another point the Minister of Finance attacked when asked by SMN News about the monies owed to St. Maarten from the division of assets. Minister Gibson said that both the Netherlands and Curacao threw a monkey wrench in the process by claiming losses which they do not intend to bear. The Minister said discussions on this matter started last week and St. Maarten made its position very clear to both the Kingdom and Curacao, meaning that St. Maarten has nothing to do with their losses and as such St. Maarten wants all that is owed to her, the NAF60M plus the NAF7 from the SOA. He said St. Maarten relayed its position to the CFT and they agreed with St. Maarten. Asked if the Netherlands and Curacao does not comply with the signed agreement what will be the next step St. Maarten will take. Minister Gibson said St. Maarten will then move to court because there is a signed agreement that has to be respected. He also made clear that St. Maarten will not accept anything less than what is owed to her when asked who will incur the transfer fees if and when the monies are paid to St. Maarten.

The Minister also told SMN News when asked for an update on the sale of license plates, that the receiver's office informed him on Wednesday that they collected NAF.600.000.00 in the sale of number plates and the process is going fairly well thus far.