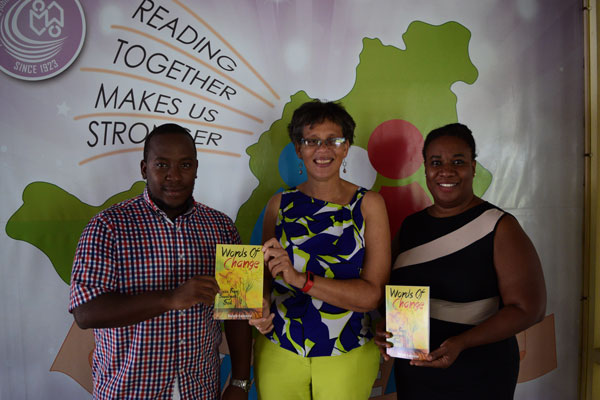 PHILIPSBURG:--- Author, inspiring politician, university student, history enthusiast, President of Parliament award winner of 2015 Ralph Cantave recently presented his new book entitled: “Words of change: Voices from Soualigan Soil”, which has been dedicated to the people of St. Martin to the Director and her staff at the Philipsburg Jubilee Library to circulate to the public at large.
It was Ralph Cantave’s great pleasure to donate these two copies of his books to the library on Friday, November 4th, 2016. Mr. Cantave stated that he spent most of his time at the library doing research from the various books that are mentioned in his book “Words of change”, such as: “The friendly anger” by Joseph H. Lake Jr.; “1963: A landmark year in St. Martin” by Daniella Jeffry; “Beyond the tourist trap: a study of Sint Maarten Culture” by Sypkens Smit, Menno; “Claude A portrait of power” by Fabian Badejo; and “Language, Culture and Identity in St. Martin” by Rhoda Arrindell, among others.
In his book Cantave, who is a youth advocate, left his message of empowerment to the youth asking them to realize their hidden talents and develop them, be responsible, intelligent, become avid readers and educate one self. To the adults of St. Martin he also had a message, which is to know one’s history, embrace your own culture, preserve the natural resources, know your identity as a people, and know where you come from and to know where you are going with your county St. Martin.
These books were gratefully received and are available to the public at the Philipsburg Jubilee Library.