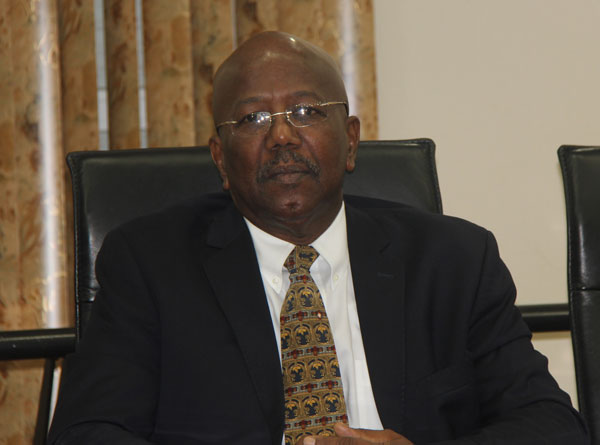 Prime Minister apologizes for the inconveniences caused by the virus attack.

PHILIPSBURG:--- Prime Minister William Marlin offer an apology to the people of St. Maarten for the inconveniences they encountered these past days since the server went down due to a virus attack. Marlin in his opening statement at the weekly press briefing said that several departments such as the Civil Registry, Tax Department, and the Receivers office will be back online by Wednesday afternoon.
Marlin said that the IT department is working diligently in restoring the server, he said that the program at the department of DIV (Central Registration Department) will have their software re-installed which will be done with the vendor that provided the software in collaboration with the IT department of Government. Marlin also said the system known as decade which operates the finance department has to also be reinstalled. He said the government is getting back on track gradually, he made clear that government is as strong as its weakest link, therefore he wants everyone to know that government could have the best system in place and it could still be hacked like other countries who were hacked in the past.
Marlin said one of the things that cause virus attacks are the amount of emails that government receives that sometimes has viruses.
Several civil servants contacted SMN News to complain about the operations of the IT department, and even though they filed a complaint with the IT department managers, nothing is basically done. The civil servants said that they are not even able to update their computers and that everything has to be done from the central which is hardly ever done. Based on email communication to SMN News those affected said that while the IT department has two managers these managers never visited the various departments but instead send the few employees they have to do the work at the various department. The civil servants that are highly affected even suggested that government should start thinking about giving each Ministry their own IT department instead of one general server. Some civil servants that are highly technological said they simply do not know when government IT will improve.
When questioned about this on Wednesday by SMN News, Prime Minister Marlin did not feel that the civil servants should speak or complain to media but instead they should complain to their secretary generals. He also said that several of government employees would use their computers to download things that are not relevant to their work, some workers he said would go on their favorite website, or even shop online while on the job. He also said that he does not believe that individuals should be given the chance to make updates with government computers. Marlin asked if these civil servants don’t like the policies in place what they are going to do about it.
Parliament meeting on French and Dutch dispute over Oyster Pond to be discussed in parliament --- Préfète Déléguée responded
The Prime Minister also announced on Wednesday that he received a hard copy letter on Wednesday morning from the Prefete in response to the letter he sent to her regarding the issues at Oyster Pond. While Marlin lashed out last week at the French for arresting someone he said is the owner of Captain Olivers while that person was on the Dutch side doing construction repairs to the marina, he refused to divulge what the Prefete said to him in her response when asked for contents of the response by SMN News.
Marlin said the meeting of parliament is to inform the Members of Parliament of the situation at Oyster Pond and the status quo agreement St. Maarten/St. Martin, The Kingdom and the State of France signed in their quad partite meetings. Marlin said there is an agreement in place that has to be respected and that agreement clearly outline the border at Oyster Pond ever since he knows himself. Further to that, he said that the French already have the bigger part of the island and the most of Simpson Bay lagoon.