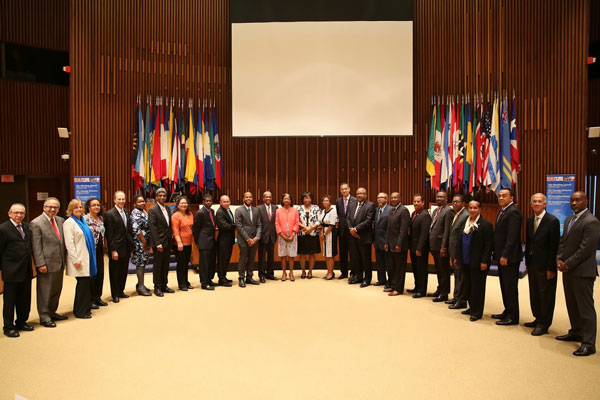 GREAT BAY:---- Dr. Virginia Asin, who is Head of the Collective Prevention Services (CPS), a department of the Sint Maarten Ministry of Public Health, Social Development and Labour, attended the 13th Council for Human and Social Development (COHSOD) Health Meeting which took place recently in Washington.
Dr. Asin attended three meetings, two in her official capacity representing country Sint Maarten – Pan American Health Organization 55th Directing Council Meeting and the Caribbean Public Health Agency Executive Board Meeting where Sint Maarten is a board member.
Dr. Asin attended COHSOD due to her personal involvement with the Caribbean Cooperation in Health (CCH) CCH-III evaluation and the CCH-IV development process. In an interview with the Department of Communication, Dr. Asin explained that she got involved back in early 2015 when she was approached by a Caribbean Community (CARICOM) representative to take part in a small group of professionals that were involved with CCH from its inception.

“I was asked as one of the more senior Chief Medical Officers in the Caribbean to also take part in the drafting committee and the monitoring steering committee for CCH-IV,” Dr. Asin explained.
The vision of CCH is: Caribbean people will be happier, healthier and more productive, each respected for his/her individuality and creativity and living more harmoniously within cleaner, greener environments. The goal is: People will be resilient, live longer and have less illness and disability throughout their lives.
The mission of CCH is: To build the capacity of countries to improve the conditions for health, for all especially among vulnerable groups and to develop and maintain cost-effective and efficient health systems.
When asked about the agenda of the meeting, Dr. Asin spoke about the main points: “The issues that were discussed at the COHSOD meeting was PANCAP (Pan Caribbean Partnership Against HIV/AIDS) grant importance. PANCAP is for Cooperation Civil Society and Government to deliver to citizens.
“Challenges discussed were Chikungunya, Zika and health care financing. Some of the other issues deliberated upon were universal health care and health coverage; and health information system.
“One of the main points discussed was Caribbean Cooperation in Health IV 2016-2025, focusing on Regional Public Goods for Sustainable Health Development.”
On the question of what are the main development goals of CCH, Dr. Asin responded with: “The following principles guide the development and implementation of the CCH IV: equity; solidarity; country-driven and people-centered; inclusive leadership; and good governance.
“The aforementioned document is from the CARICOM, associate member states, and non-CARICOM members who are members of the Caribbean Public Health Agency (CARPHA) which Sint Maarten is a member.
“17 million people from the 15 Member States of CARICOM, and the five Associate Member States of CARICOM are in a transition phase from CCH III to CCH IV. This is related to the individual countries health security associated with their tourism-dependent economies that require a broader vision.”
Regarding the type of programs and projects that CCH is involved with, Dr. Asin had this to say: “The CCH deals with functional cooperation in health in the Caribbean Basin. The region has made many health gains through cooperation under CCH III such as the establishment of CARPHA; and regional cooperative approach to addressing emerging and re-emerging vector-borne diseases.
“Mother-to-child transmission of HIV has been nearly eliminated and some countries are preparing for certification of elimination; regional cooperation around the implementation and evaluation of the 2007 Declaration on the prevention and control of Non-Communicable Diseases (NCDs); and observation of Caribbean Wellness Day in all countries.
“CARICOM’s successful high-level advocacy elevated NCDs as a development challenge at the global level at the 2011 United Nation’s (UN) High-Level Meeting on the Prevention and Control of NCDs, according to a report that I read.
“Another gain has been the approval of the Caribbean Pharmaceutical Policy and the establishment of the Caribbean Regulatory System, a unified registration process.
“A CARPHA Lab Advisory Group was established and plans have been developed for a Laboratory Network. Advances have also been made in the implementation of International Health Regulations 2005.
“There was approval of the Plan of Action for Prevention and Control of Childhood Obesity, 2014-2019 – Safeguarding our Future Development – Promoting Health Weights in the Caribbean, and 61 years of Annual Caribbean Health Research Conference.”
When Dr. Asin was asked about the CCH-IV program, she had this so say: “The new CCH IV has benefitted from a comprehensive evaluation of CCH III which included the participation of a wide range of stakeholders.
“The CCH IV, a framework for coordinated action and collaboration among partners for health in the Caribbean, has been compiled in the context of recently approved regional and global health agendas such as the CARICOM Strategic Plan 2014-2019, and the UN Sustainable Development Goals.
“CCH IV also integrates the “One Health Policy” approved by COHSOD in 2014 which calls for a shift in paradigm to consider the health of humans, animals and the state of the environment when addressing an issue in anyone of these sectors,” Dr. Virginia Asin concluded.
Various member states were in attendance represented by 11 Ministers, Caribbean institutions including Regional civil society organizations: Caribbean Family Planning Association, Healthy Caribbean Coalition, and University of the West Indies, CARPHA, and the U.S. Center for Disease Control.