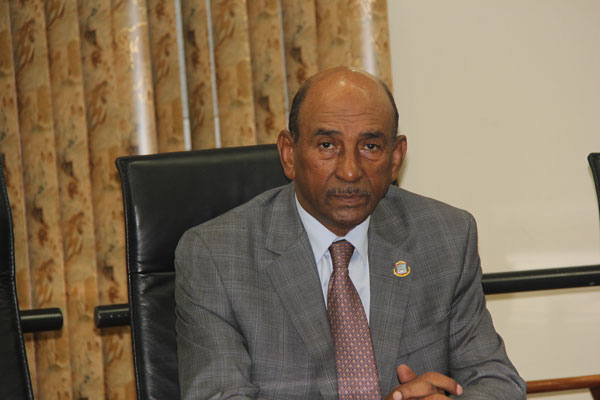 Kingdom is also hesitating to work with the United States to solve the issues of de-risking facing the Caribbean.

PHILIPSBURG:--- Despite submitting a balanced budget for the year 2016 and prepared a balanced budget for the year 2017 on time Minister of Finance Richard Gibson Sr announced at the Council of Ministers press briefing on Wednesday that the CFT has sent a negative advice after conducting their mid- year reports on St. Maarten and they identified that St. Maarten cannot meet its projection in the 2016 budget and as such they advised the Kingdom Council that St. Maarten could not meet its benchmarks and such advised the Kingdom Council that St. Maarten did not meet the norms of the Kingdom when it comes to supervision and as a result the country could no longer borrow monies. Minister Gibson said that the loss of revenues for various reasons, one being the decline in business and TOT taxes, the loss of Cruise Ships the economic decline worldwide are only some of the reasons that government collected less monies. Gibson said that the CFT did not take into consideration the debt relief that St. Maarten is supposed to collect, neither the dividends from the Central Bank. He stressed that the decrease in economic activity on St. Maarten did impact the country. He also stated clearly that he do support agree with the letter and conclusions of the CFT since they did not consider the information St. Maarten provided to them, including the dividend payments from the Central Bank. Gibson due to the decision taken by the CFT the NAF26M St. Maarten had as roll over dating back to 2010, the Kingdom will no longer subscribe to the roll over since this will constitute a new loan, however, and they agreed to extend the NAF26M loan for a period of 7 years with an interest rate of 0.5%. He said that St. Maarten would not have to make any payments during the first two years but they would have to start paying as of the third year which is about NAF5M per year. Gibson said that the government has some mixed feelings on this matter even though they have a cheaper interest rate, but it will hinder the long-term agreement on the bond issue with the Central
Asked by SMN News if St. Maarten contested the letter or decisions taken by the Kingdom Council Minister Gibson said that at this time he will not contest the decision or the letter of the CFT but would do so at the end of year when St. Maarten has all its figures which would be used as evidence to defend St. Maarten’s position.
Minister Gibson also announced that the United States expressed willingness to work with the Dutch Caribbean Islands and Jamaica in finding a solution just as they did for Mexico with the issues of de-risking. However, even though the USA expressed their willingness to work with the islands the Kingdom has to participate in the proceedings but so far the Kingdom has been hesitant in doing so. Minister Gibson said the Dutch Caribbean islands are awaiting the decision of the Kingdom. He insisted that the de-risking issue is a life issue for the Dutch Caribbean islands and hopefully the Dutch will see the seriousness of de-risking issues and get on board as soon as possible. Asked by SMN News why the Kingdom is hesitating and if they gave reasons for such. Minister Gibson said the only reason the Kingdom gave was they were concern with the supervision of the Central Bank of Curacao and St. Maarten but other than that they did not give any details or specifics. The Minister said he is leaving the island on Wednesday to further discuss the matter with his counterparts, in order for them to meet the bar the Kingdom has set.
2017 Budget sent to Governor.
Minister Gibson also announced that the 2017 draft budget is at the Governor for his review, he said that the Council of Advice already made their comments and as soon as the Governor sends back the draft budget to the Council of Ministers they will address the comments then send it on to the parliament of St. Maarten.

CASINOS paying their arrears --- agreement made for monthly payments.

Minister Gibson also announced that the casino's owners that were not paying their taxes had to make a substantial one time payment as they began paying off their debts while they also made an agreement with the tax department to make a monthly payment. Minister Gibson said the regulation on settling the taxes owed to government by casinos applies to all casinos operating on St. Maarten.