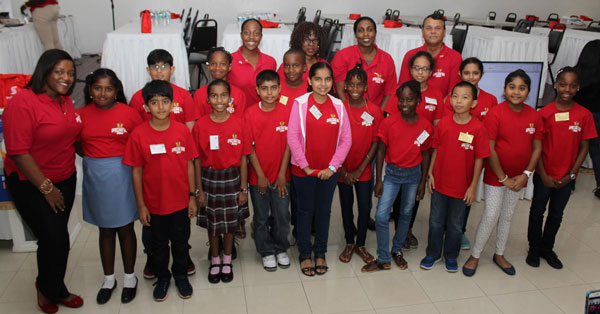 There was an exciting finish to the preliminary round as there was a tie for the 15th spot between three schools, namely St. Dominic’s Primary, represented by Aman Sukhani, Asha Stevens Hillside Christian School, represented Ashley Callo Torres, and the Adrian T. Hazell Primary School from Anguilla, represented by Sage Connor. There was a 15-word spell off that eliminated the student from the Asha Stevens Hillside Christian School, and still tied the other two schools. There was final spell-off, with the student was from St. Dominic’s Primary School emerging victorious.

The representative from Scotiabank, Ms. Selma Baker, said that by sponsoring the Spelling Bee, this is one of the ways they are able to give back to the community.

Chairman, Rotarian Wayne Wilkie, thanked the teachers and the students for taking part, as the Spelling Bee would not be possible without them.

Rotarian President, Veronica Jansen-Webster of The Rotary Club of St. Maarten-Mid Isle, thanked the sponsors who made it possible for the Spelling Bee to take place and mentioned that the tutoring sessions had been very successful. The main sponsors for the Spelling Bee are Scotiabank, with gold sponsors being The Princess Juliana International Airport, GEBE, and Smitco, and the silver sponsor is UTS.

Head Judge, Rotarian Elisia Lake, said the tutoring sessions had been well attended and helped the children, as we have never had so many schools taking part in the past. She explained the rules to the students and parents before the Spelling Bee began.

The Semi-Final round will be held on Sunday, October 23rd at The Belair Community Center at 1 p.m. and everyone is encouraged to come out and support the semi-finalists. Please remember to be there early.