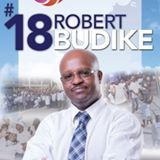 PHILIPSBURG:--- Robert Budike, Number 18 on the National Alliance Slate would like to extend his gratitude for the 39 persons who casted their votes on him in the last elections and also for the moral support he received from everyone. It was his first time running on a political slate and it was a humbling, but very exciting experience for him and he got to learn the society better. He definitely supports this coalition government and he foresees great things happening for the people of this beautiful island as both parties agreed to do away with their differences and to work very hard for everyone. The people have spoken and we as politicians have to respect the people’s choice.
He said that he will definitely contest the next elections once God spares his life.