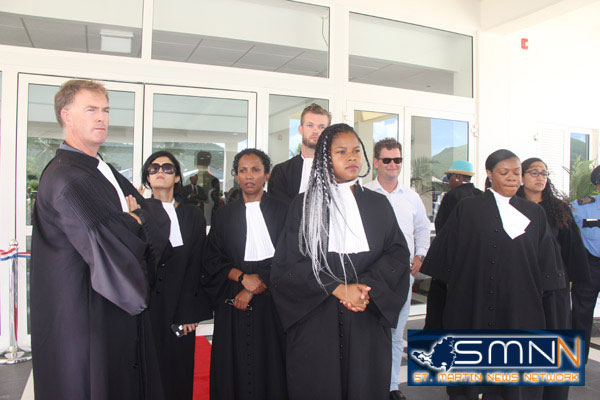 PHILIPSBURG:--- A group of Attorneys headed by Gerald Hatzmaan showed up shortly before the opening ceremony at the New Government building began demanding to see the Minster of Justice Edison Kirindongo whom they said they had an appointment with for 9am Friday morning at his A.T. Illidge Road office but the Minister of Justice never showed up for the meeting. The lawyers marched through the gathering in their court gowns and stood at the entrance in front of all the invited guests as they waited for the Minister of Justice to meet with them.
According to Hansman and other lawyers who also spoke to the media said that they had a 9 am appointment with the Minister at his A.T Illidge Road office but when they reached there and waited for the Minister for some 45 minutes they were directed to the New Government Building where the opening ceremony was taking place by the staff of the Ministry of Justice. Hansman said the Minister’s staff told them to go to the New Government Building since the Minister of Justice was there. Asked if they made an appointment with the Minister’s office to meet with him on Friday morning the lawyers did not answer the question directly, but said that the information was in one of the newspapers and the Minister was aware of the meeting and also aware that they were at his office.
The attorneys said that it’s been years now they have not been paid their “picket” fees while they are being called to represent suspect even minors. They further stated that it’s been three weeks now they are on a silent strike and that they have met with the Minister a number of times and discussed their grievances. The lawyers further explained that the Minister promised to pay them by August 1st and to date they have not received their monies. Hatzmaan said some lawyers did not get pay since 2010 and some since 2011. He said he personally got part of his monies but government still owes him a lot more. Besides the monies owed to them Hatzmaan said they are seeking an increase in the ‘picket” fees because it’s been years now they have been representing clients that are given the ‘yellow card” for a mere $500.00 and they are asking that the amount be increased to $1000.00 since they did not  get an increase since 1993. He said in Curacao and Aruba has doubled the fees due to the inflation. 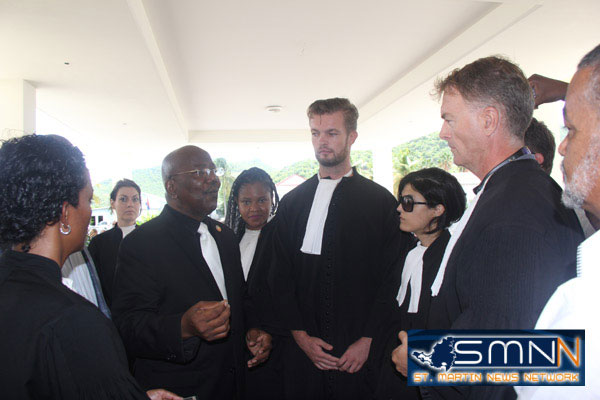 Attorney at Law Shaira Bommel said that clients including minors are being deprived of their rights while they are on strike. Bommel said they wrote the Minister of Justice several times and not once they got a response.
Attorney at Law Zylena Barry who was among the protesting lawyers said that they have had discussions with the Minister and he even promised to increase their fees and make their payments on August 1st but to this day nothing has been paid to them. Barry said every lawyer give one week of their time to defend suspects who cannot afford to pay lawyers for a meagre fee. She said it is not so much about the amount of monies they are being paid but mostly giving a service to suspects that have a legal right to representation. She said that the increase promised for August was not given and what ended up happening is that they did not get paid. Barry said they found out that the monies that were allocated to pay them were depleted and now there are no monies at all to pay them. Barry said that they started the protest three weeks ago since they  have not been representing any of the clients in court. Barry said that they  are not disruptive but instead they are demanding an audience. She made clear that they did not intend to disrupt the opening of the government building but instead they are demanding what is due to them, further to that Barry said the people waited eight years for the building and waiting a few minutes will not kill anyone, instead their actions is for a greater good.
While at the New Government Building Prime Minister William Marlin approached the attorneys, and told them that he called the Minister of Justice and he admitted that the lawyers were at his office but he was not there but by the time he got there the lawyers had left. Marlin said when the matter got to him he arranged some payments for Attorney Law Hatzmaan who ultimately got some of his monies. Marlin then asked the lawyers to allow the opening ceremony to take place and after that meeting, he will meet with them. The Prime Minister even informed the lawyers that their payments are being worked on but since they started moving earlier this week, they could not finalize the payments.
The lawyers then left the entrance of the Government Building and even participated in the opening ceremony until they got an audience with the Prime Minister.
Shortly after the opening ceremony ended Minister of Justice Edison Kirindongo arrived at the building where he also participated in the meeting with the lawyers.