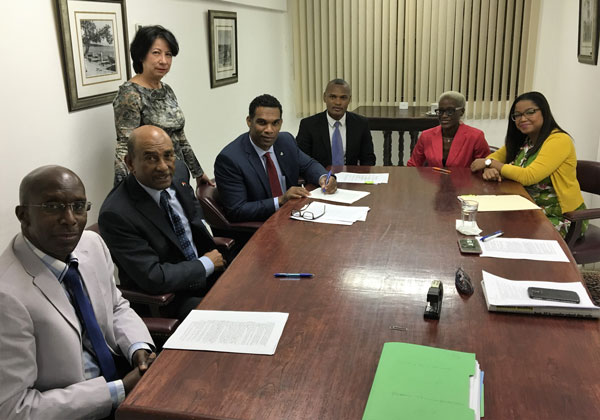 PHILIPSBURG:---  With a deed signed before a notary as well as a purchase and sale agreement reached between parties concerned, the way has been paved for the construction of new parking facilities in Philipsburg.
The long anticipated facilities are a project of the general pension fund, APS, which signed the deed to the area where the facilities are to be constructed, on Thursday. Earlier a sale and purchase agreement was also signed by APS with the government of St. Maarten.

Prior to this recent development, the St. Maarten government and APS entered into a preliminary debt settlement agreement on February 5, 2016, with respect to the payment of the debt that St. Maarten has with APS for an amount of over 83 million guilders.

The sale of the parcel of land is part of the agreement reached to reduce the total amount of monies owed to APS by the country of St. Maarten. With a value of just under 4.5 million guilders, the transfer of the parcel will be reduced to about 79 million guilders. This remaining amount will be settled with funds coming from the settlement of the division of assets of the former Netherlands Antilles and from the sale of the new government building to SZV.

APS is now the owner of the parcel of land located in Philipsburg, bounded to the south by the parcel of land on which the New Government Administration Building is constructed on Pond Island.
APS plans on utilizing the newly acquired parcel to erect and exploit a multi-story parking facility and commercial /office units, as was agreed upon in the debt settlement agreement of February 2016.