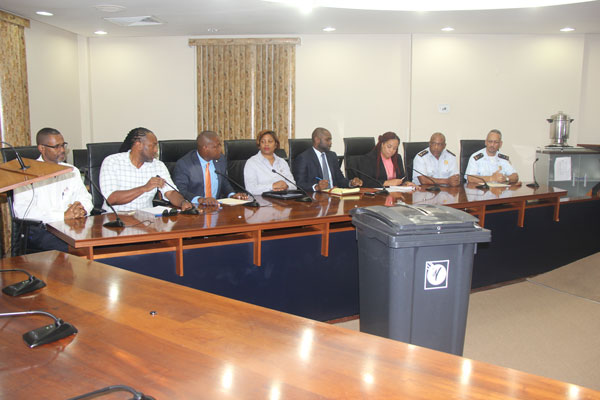 PHILIPSBURG:--- The voting bureau and all stakeholders that will be manning the election process on September 26th, 2016 called on voters to vote early to avoid congestion in the evening.
Chairman of the voting bureau, Jason Rogers said there will be 20 polling stations in 20 districts which have over a 1,500 voters in most districts. Rogers also indicated that there are some changes that voters must pay keen attention to, one being that eligible voters would only get two hours off if their working hours fall during voting hours which is from 8am to 8pm at night. He said the two hours is not mandatory by law, but employers do have to give their employees two hours off in the event they are scheduled to working during voting hours.
Rogers and the police also made clear that persons who wait at the end of the evening to go to the polling stations will not get to vote if they are not in line by 8pm. The main call from both the police and the voting bureau is for the voters on St. Maarten to use the daytime hours especially in the morning to cast their votes in order for the election process to take place smoothly.
The voting bureau along with Election Watch will be broadcasting all day and giving hourly updates via DCOMM on Election Day starting at 9am while voting bureau headquarters will be moved over to the house of parliament instead of the Government Administration Building. On Election Day the election process will be live streamed on through parliament live streaming.
Rodney Richardson, head of the Department of Communications also indicated that while hourly updates will be given, the various media houses will get the information to disseminate. He said that since the voting bureau has moved their headquarters to the house of parliament, two large screens will be erected at the A.C Wathey Square where persons can view the Election Watch night after the polling stations closed and the results are being transmitted.
As for telephones and cameras, while the Minister of Justice announced that these gadgets will not be allowed in the polling station, Rogers and Chief of Police 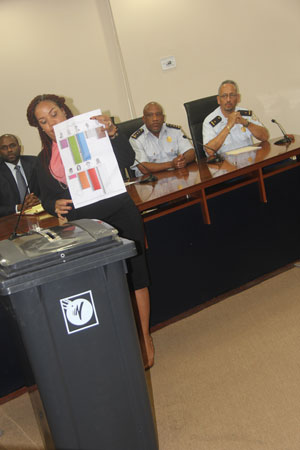 Carl John made clear that there is no legislation in place to legally prevent people from taking phones and or cameras inside the polling stations. Rogers said in discussions with the prosecutor’s office and Minister of Justice they do understand the Minister’s view on having persons leave their phones outside of the voting booths but the law does not permit them to forcibly take away people’s phones and or cameras. The only person who could actually take such a decision is the chairman of each polling station who has to decide if someone should be prohibited from taking their phones inside the voting booths. The voting bureau neither police did not say if there are any set guidelines to assist the chairman of the polling stations as to when they could prevent people from entering the voting booths without their phones. However, they did say that the police will be present all over on Election Day and at the polling stations to intervene in the event there are incidents.
Asked if there are set guidelines as to how far away political parties and those wooing people to vote for them or their party has to be from the polling stations, Benjamin Gout from the traffic department said that also does not any specifics. He said that it depends on the location of the polling stations, and how far away the barricades. Gout said barricades will be set up at each polling station to assist with orderly behavior and the proper lining up of voters.
The management of GEBE has been working closely with the voting bureau to ensure there is power throughout Election Day, thus the management of GEBE has decided to hold back on the maintenance of one of their engines in order to ensure that is a back-up engine in the event something should go wrong with one of the current engines that are working.
The civil registry also gave reporters a demonstration as to how new voters should vote on Election Day.

• Voters must present themselves at the polling station with the voting card and valid identification card.
• At the polling station the chairman of the polling station will check the voter's registry to compare the person’s information on the voting cards and if all information corresponds then the voter will be given a ballot.
• Voters are asked to use ONLY a red pen that will be inside the voting booths, they are asked to make sure they color inside one circle (besides the name of the candidate they are voting for).
• VOTERS ARE ASKED NOT TO COLOR MORE THAN ONE CIRCLE AND NOT TO WRITE ANYTHING ON THE BALLOTS SINCE THAT WOULD MAKE THEIR VOTES INVALID.