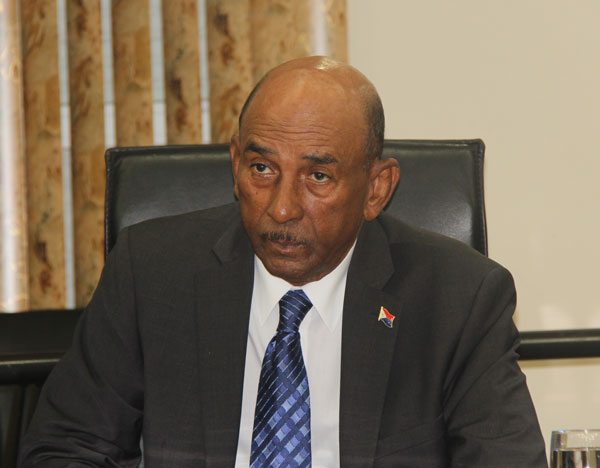 PHILIPSBURG:--- Minister of Finance Richard Gibson Sr. announced on Wednesday at the Council of Ministers press briefing on Wednesday that he travelled to the Washington United States last week, along with the Minister of Finance of Curacao where they met with the ambassador of the Kingdom of the Netherlands who reported to him that the United States is prepared to work with the Dutch Caribbean Islands in finding a solution to the de-risking issues that are affected by correspondent banking issues mostly known as de-risking that affects the entire Caribbean.
Minister Gibson said in his announcement said that correspondent banks have been terminating their relationships with local banks making it impossible for some countries to make cross-border payments.
Gibson said prior to that meeting they also had a meeting with the department of Justice of the United States, the White House, and IMF and some other departments to discuss the said issues which led to the meeting held last week. Gibson said the news they received last week from the ambassador for the Kingdom of the Netherlands is good news because they expect some type of written agreement with the United States which will prevent St. Maarten from experiencing the issues that Belize have.
Asked by SMN News if this agreement will assist the local businesses that were asked to close their accounts because those accounts were considered suspicious. Minister Gibson said the de-risking issues are not intended to assist anyone that was requested to close their accounts but in fact, its intended purpose is to address the cross-border issues with correspondent banks and to also give the Dutch Caribbean islands the possibility to have the same type of agreement Mexico has with the United States.