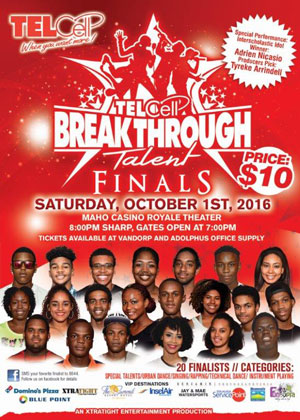 Pond Island:--- Organizers are building up exciting for the upcoming TelCell Breakthrough talent show finals by opening up the mobile network to SMS voting for their favourite contestant(s).

Each year, family, friends, fans and members of the public are given a chance to boost the confidence of their favourite performer and shine the light on them in the weeks leading up to the main event on October 1, at the Theater Royale, Maho.

All they have to do is send an SMS text of the number below associated with their favourite Breakthrough contestant to : “8844”.

“Friends, family, fans and anyone sending a text message of their favorite contestant’s number, is free to do so as many times as they want until the end of the showcase on October 1st when voting officially stops,” said co-organizer of the event, Angel Richardson.

Angel says contestants receiving the most SMS messages will be announced on the night of the event.

Meantime the names and numbers of the contestants are: