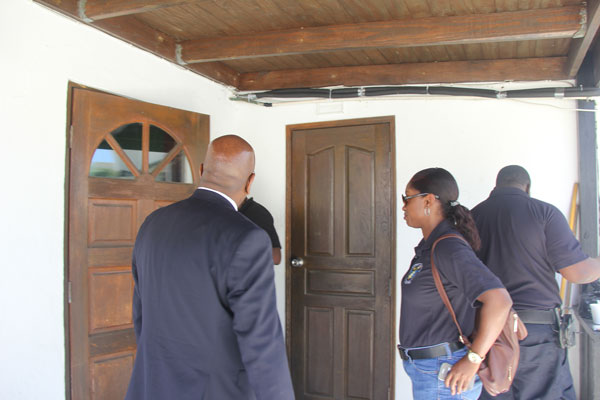 PHILIPSBURG:--- The office of the Windward Island Civil Servant Union (WICSU) PSU was packed to its capacity on Thursday morning when all prison guards and prison workers abandoned their posts at the Pointe Blanche Prison to meet with their unions, namely, the ABVO, NAPB, and the WICSU to discuss their grievances.
Even though a large number of prison guards reported sick and is on lengthy sick leave, most of them managed to attend the meeting that was called by the union to address the concerns of the prison workers.
While the prison guards and their union representatives did not speak to the media as they claim they were in a meeting, they also refused to even welcome Prime Minister William Marlin who left his office and went to the WICSU office to gather information and probably find solutions to the crisis but one of the prison workers that was dressed full uniform and some others asked the Prime Minister who invited him to the meeting, in response Prime Minister William Marlin said he was not invited but felt it was necessary for him to reach out to the unions and their members. Those who met the Prime Minister outside made clear to him that he was not invited and as such he could not enter the meeting. Marlin then left and went back to his office.
The meeting started around 7am and by 12:30 the union representatives and some of their members left the WICSU office and marched over to the Government Administration Building where they deposited a letter for the Minister of Justice Edison Kirindongo. After the union representatives dropped off their letter at the Department of General Affairs, they came outside and told their members, especially those that had to work from 7 to 3pm to return to work while those that have to work in the evening should report to duty as usual.
SMN News reporter asked the union representatives if they were willing to make a statement as to the industrial action (or meeting) they called, they said that they were not going to make any statements for now until they get a response from the Minister. 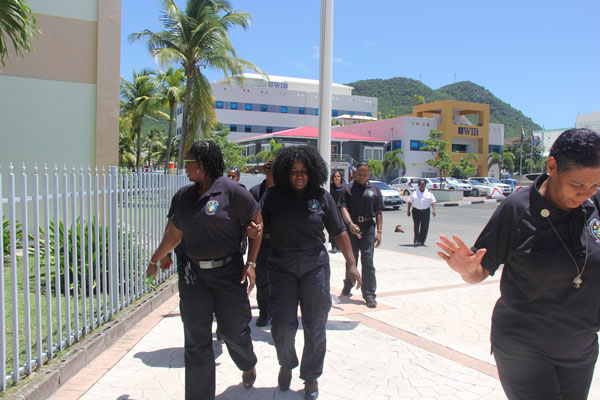 On Thursday, prisoners were left hungry as no breakfast was served to the prisoners. SMN News also learned that the prisoners at Pointe Blanche House of Detention have been locked in their cells since last week Wednesday when the shooting took place inside the prison that claimed the life of a prisoner Omar Jones. SMN News further learned that the prisoners have not seen sunlight since that day, they are denied all types of medical services such as doctors and nurses. It is also understood that since last week the prisoners are even denied visits. SMN News understands that some lawyers have come together to address the safety of their clients and also to address the human rights violations at the house of detention.Besides that the several prison guards are on lengthy sick leave and as such the police and VKS are currently assisting with security at the house of detention. Thursday's industrial action it is understood is aimed at getting the Minister of Justice Edison Kirindongo to remove the director Edward Rohan from his position since they deem him to be incompetent. According to some of the prison guards who spoke to SMN News on the condition of anonymity said that this is not the first time illegal firearms were smuggled into the prison facility and the latest one was used to shoot a prisoner identified as Omar Jones to death. They said that the director never made any attempt to speak to the prisoners or his staff, thus making the staff far more angry.

On Thursday morning, a delegation from the Ministry of Justice and head of the VKS Antonio Rogers and others among others were in a meeting at the Pointe Blanche Prison.

Click here to view photos of the action taken by Prison Guards on Thursday morning.