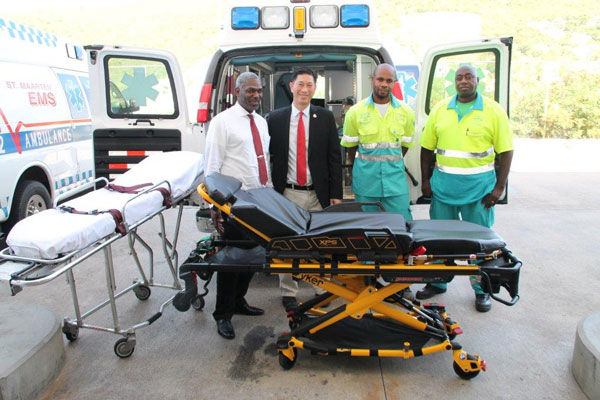 PHILIPSBURG:--- Minister of Public Health, Social Development, and Labor Emil Lee said that the investments in the ambulance Department are a critical part of the Country’s Emergency Response team.
The Minister mentioned this during Wednesday's council of Minister's press briefing where he announced that on September 6, the ambulance Department, commissioned their 1st of 3 new ambulances.
Minister Lee said that the other two ambulances are currently being manufactured and outfitted, and are expected to arrive within a few months.
The Minister informed that 7 hydraulic stretchers were ordered of which the first arrived. He stated that “Many of the employees at the ambulance Department have complained that they have problems with their back, joints, and knees while using the manual stretcher”. The hydraulic stretcher which allows the staff to push a button for assistance solves this problem.
Minister Lee also made mention that the Ministry has finalized the plans to digitalize the run sheets for the ambulance Department. “Currently, the administration for the Ambulance Department is a paper system which needs to be manually entered into the administration,were,W was done,” he said. That process will now be automated.
Besides getting new equipment, investments have also been made in training programs for the ambulanW was done with the RAV. RAV is a training service from the Netherlands (Brabant) that worked together with the Ambulance staff of St.Maarten a few months ago.
“I think this goes well with the Ministry’s cooperation with different social partners for the first aid courses in the community. It’s always best if citizens, and in particular teachers, go through this type of training and know what to do and what not to do in emergency situations. All of this fits well into the Ministry’s Plan of improving the overall quality of healthcare in St.Maarten” said Minister Lee. 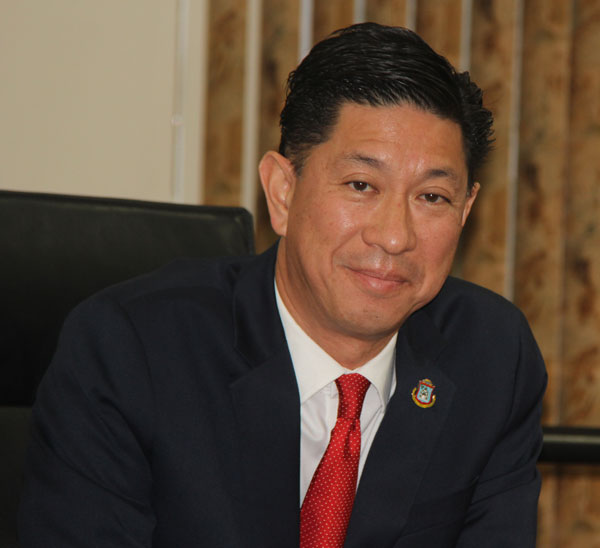 During Wednesdays Council of Minister's press briefing Minister of Public Health, Social Development, and Labor Emil Lee said that the Hospital is now empowered to collect the ambulance fees on behalf of government.
With the recent investments in equipment for the Ambulance Department, Minister Lee made it clear that investments come at a cost, and need to be paid back. In this regard, the Ministry is looking at how it can improve the revenues that the ambulance department collects.
Minster Lee said that over the years, the revenue collection from the ambulance department has been very low. The Minister said that from experience, the process of collecting ambulance fees can take many months.
To solve this, a cooperation agreement has been made between the hospital , the Ministry of VSA, the receivers office, and the ambulance Department for the hospital to collect the fees for the Ambulance Department.
Minister Lee said that the hospital will receive a 10 % commission in exchange for their service. “This also helps to support the revenues of SMMC, and also helps government, to increase its revenue” ,said Minister Lee.
“Starting as of May, projected through December 2016, a three-fold increase is projected in the revenues to be collected for Ambulance service. In 2015, NAF 72,189, was collected for the year, and in 2016 over Naf 200,000 is projected to be the revenues. For 2017 in combination with the digitalization of the run sheets, we are expecting even greater revenues” said the Minister.
The current fees that are charged by the ambulance for services are Nafl 275-, for emergencies and Nafl 138-, for non-emergencies. This is quite low for ambulance services. A good comparison is Curacao which chargNFLafl 915 for emergencies, and Nafl 458 for non –emergencies. This clearly shows a need to adjust our tariffs.
The Minster thanked members of his ministry Selby Philips, Cylred Richardson, and Roxanne Howell. He also thanked Minerva Gumbs and staff from the receivers office and Davina Cabiere from SMMC for working diligently on this agreement.