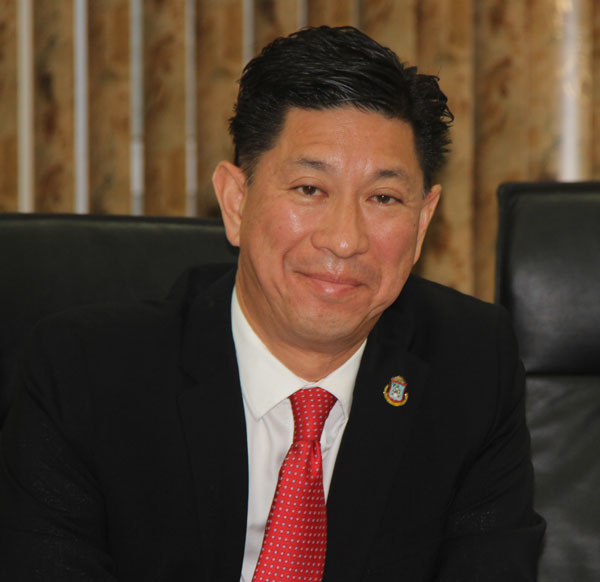 PHILIPSBURG:--- The Minister of VSA Emil Lee was certainly not happy on Wednesday when he attended the Council of Minister's press briefing to address the contract that the Director of USZV is about to sign with INSO which was slated for August 31st, 2016.
Minister Lee started off his opening statements by stating that he is conducting the people’s business in an open and transparent way. He said because of that he received a number of phone calls pertaining to the contract that the director of USZV Glen Carty along with him was supposed to sign with INSO on August 31st, 2016 based on the Tender documents and USZV website. The Minister referred to the article SMN News published without mentioning names of the media house, he ranted about the statements in the article that state that he should save his explanations and excuses for the National Detectives whenever they knock on his door, the Minister said he personally called the National Detectives and gave them his phone number and address because he has nothing to hide.
As per the dialysis center that is not part of the DBM contract, Minister Lee said the intention is for them to build the dialysis center first, (before the construction of the hospital) and that is why it is not part of the contract that will be signed with the contractor (INSO). He said that the current dialysis center is too small and cannot cater to the needs of the people, therefore, a decision was taken to reserve an area and build the dialysis center first since it is one part of the hospital that generates income. However, the Minister did not say who will build this separate building, and where the monies will come from. At no point did the Minister mentioned this before the tender documents and terms of reference were published by SMN News. Even the though the Minister said that dialysis center will be built before, it should be noted that there is no tender process or bidding for the dialysis center. Yet the Minister claims to be open and transparent. Based on the tender documents the construction of the new hospital will commence sometime in the month of September, yet no information as to the bidding process to construct the dialysis center, no information as to will finance this much-needed facility that generates the most income. The question one now has to ask themselves is if this center was outsourced and now that SMN News exposed the DBM contract the Minister found a way to patch things up without providing all the necessary information on who will finance and build the dialysis center. It must be made clear that based on the Tender Documents it clearly states that the construction of the New Hospital will start in the month of September.
He further stated that he has been exploring all possible means to obtain financing for the hospital one being getting a loan from the Netherlands.
The Minister claim that there are people that have political motives and are doing everything to stop the project, and he wants to know why certain politicians are visiting hospitals now.
Asked by SMN News if the contract that was scheduled to be signed on Wednesday, August 31st will take place, the Minister said that will not happen because negotiations are still ongoing with the contractor, asked if the current negotiations involve which local contractor will work with INSO to construct the hospital, the question certainly irritated the Minister, who then responded by saying that people believe that there is some scheme or insider trading with the new hospital. He said that he already indicated to the contractor that when the contract is signed that they will have to do business open and transparent by putting out a bid in order to select a local contractor.