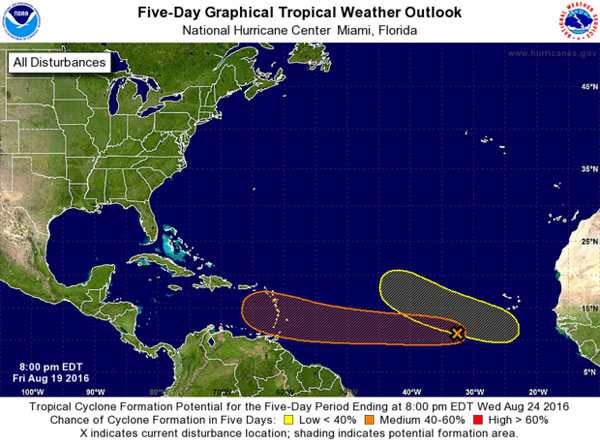 A tropical wave about 600 miles southwest of the Cape Verde Islands could develop into a tropical depression by the middle of next week, the National Hurricane Center said Friday evening (Aug. 19).

The system is moving westward at 15 to 20 mph across the Atlantic Ocean and into the eastern Caribbean Sea. The wave is producing a broad area of low pressure, but only a few showers and thunderstorms, the hurricane center said.

The wave could see some slow development during the next couple of days, with a 10 percent chance of formation.

However, the chance of formation increases to 50 percent through the middle of next week, when environmental conditions are forecast to be more conducive for development, the hurricane center said.

A second tropical wave, forecast to move off the west coast of Africa on Saturday, is expected to gradually develop early next week while it moves generally west-northwestward over the Atlantic.