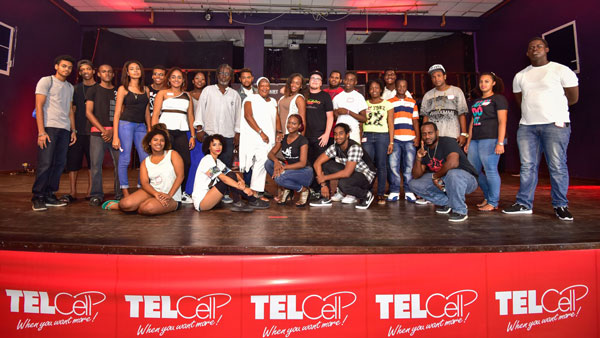 Pond Island:--- Twenty (20) of St.Maarten’s top talented youth danced, rapped, sang and performed their way through to the finals of TelCell’s Breakthrough auditions at the Cultural Center, Backstreet, Saturday.

Organizers say the acts started to roll out shortly after 8:00 am and continued throughout the day until 2:30 pm. with some “mind-blowing” performances along the way.

“Just when you think you’ve seen the peak of St. Maarten’s youth talent, then someone comes to the stage and they just blow everyone away,” said co-organizer, Angel Richardson of TelCell,

She said judges had their work cut out sorting through many acts and came up with the following list of performers they would like to see competing for the coveted title of TelCell Breakthrough Winner 2016 at the Casino Royale Theater later in the year, along with the blaze of publicity and recording contracts included in the prize package for winners.

The organizers also announced a “Producer’s Pick” award for 2016 to Tyreke Arrindell for singing.

According to Berteaux “Mr Rudge” Fleming of Xtratight Entertainment and also co-organizer of the Telcell Breakthrough event, it’s obvious that the word is out there about St. Maarten’s most popular youth talent show, based on how prepared the young talents were this year.

The acts, going forward, will be in the categories of Instruments; Urban dance; Vocals, Rapping, Dance Technique and Rare talents (which includes a fire dancer and comedy theater)

“Many of the performances were very polished. It was clear some of the performers worked hard to making a first and lasting impression with our distinct panel of judges,” said Mr. Rude.