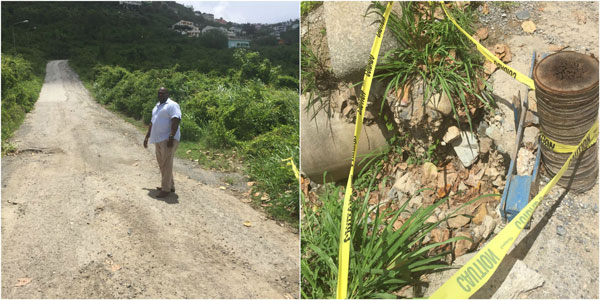 PHILIPSBURG:--- MP Emmanuel is now changing his stance to the government concerning Weymont Hill Road. The member of parliament is pleased that government will soon start with the upgrading of the road. The MP said when many in government said it’s a private road. Emmanuel said he was persistent and hard with the government to get it done, for the sake of the residents living in the area.
He said as much as it is a private road "it's not private people that live there" The Member of Parliament, however, believes that government should not stop there and also look at the road behind the Cake House supermarket. He said from the entrance to the end is in a deplorable state which is affecting the normal way of life for residents in the area. Emmanuel said he's hard on government because he knows that they can get the job done to make the living. easier for people. A month ago the Member of Parliament made a bold stance and said "he's calling on the Prime Minister and the Minister of VROMI to put their money where their mouths are and don't just talk. He's pleased to say the job will be done which would bring relief to the residents