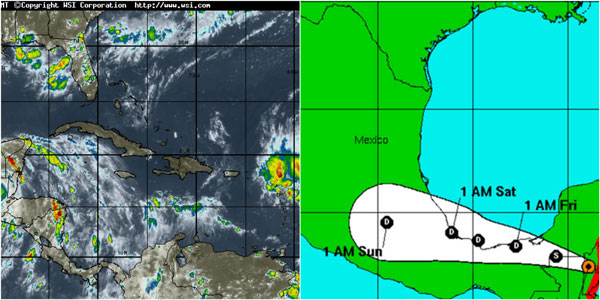 The 2016 Atlantic hurricane season is a current event in the annual tropical cyclone season in the northern hemisphere. The season officially begins on June 1, 2016, and will end on November 30, 2016. These dates historically describe the period each year when most tropical cyclones form in the Atlantic basin and are adopted by convention. However, as illustrated by Hurricane Alex and Tropical Storm Bonnie, the formation of tropical cyclones is possible at any time of the year. This season started exceptionally early, nearly five months before the official start, with Hurricane Alex forming in the Northeastern Atlantic in mid-January. Tropical Storm Bonnie followed in late May, which was the first occurrence of two pre-season Atlantic storms since 2012 and only the third occurrence since 1951.

To this point, most forecasting groups have called for this season to be a near average to above average season, due to a combination of factors including an expected transition to La Niña and warmer than normal sea surface temperatures in the Gulf of Mexico, Caribbean, and Western Atlantic, despite near-average sea surface temperatures in the Atlantic Main Development Region near Cape Verde.

TSR 16 Dec 2015 13 5 2
TSR 5 Apr 2016 12 6 2
CSU 14 Apr 2016 13 6 2
NCSU 15 April 2016 15-18 8-11 3-5
UKMO 12 May 2016 14 8 NA
NOAA 27 May 2016 10-16 4-8 1-4
TSR 27 May 2016 17 9 4
Ahead of and during the season, several national meteorological services and scientific agencies forecast how many named storms, hurricanes and major hurricanes will form during a season and/or how many tropical cyclones will affect a particular country. These agencies include the Tropical Storm Risk (TSR) Consortium of the University College London, the National Oceanic and Atmospheric Administration (NOAA) and Colorado State University (CSU). The forecasts include weekly and monthly changes in significant factors that help determine the number of tropical storms, hurricanes, and major hurricanes within a particular year. Some of these forecasts also take into consideration what happened in previous seasons and the predicted weakening of the 2014–16 El Niño event. On average, an Atlantic hurricane season between 1981 and 2010 contained twelve tropical storms, six hurricanes, two major hurricanes, and an accumulated cyclone energy (ACE) index of 66–103 units.

The first forecast for the year was issued by CSU on December 10, who anticipated that one of four different scenarios could occur. TSR subsequently issued their first outlook for the 2016 season during December 16, 2015 and predicted that activity would be about 20% below the 1950–2015 average, or about 15% below the 2005–2015 average. Specifically they thought that there would be 13 tropical storms, 5 hurricanes, 2 major hurricanes and an ACE index of 79 units. A few months later, TSR issued their second prediction for the season during April 6, 2016 and lowered the predicted number of named storms to 12 but raised the number of hurricanes to 6. On April 14, CSU predicted that the season would be near-normal, predicting 13 named storms, 6 hurricanes and 2 major hurricanes with ACE near 93. On April 15, North Carolina State University predicted the season would be very active, with 15-18 named storms, 8-11 hurricanes and 3-5 major hurricanes. A month later, the United Kingdom Met Office (UKMO) released its forecast, predicting a slightly above-average season with 14 named storms and 8 hurricanes. It also predicted an ACE index of 125, being the average ACE index 103. On May 27, NOAA issued its first outlook calling for a near-normal season with a 70% chance that the atlantic could see 10-16 named storms, including 4-8 hurricanes of which 1-4 could reach major hurricane status. NOAA also stated that there is a 45% chance of a near-normal season, 30% chance of an above-normal season and 25% chance of a below-normal season. Also on May 27, TSR substantially increased their forecast numbers, predicting activity would be about 30% above the average with 17 named storms, 9 hurricanes, 4 major hurricanes and an ACE near 130. The reason for the increased activity forecast was the increased likelihood of La Niña forming during the season in addition to a trend towards a negative North Atlantic Oscillation, which generally favors a warmer tropical Atlantic. TSR predicted that there is a 57% chance that the 2016 Atlantic season would be above-normal, a 33% chance it would be near-normal, and only a 10% chance it would be below-normal.

2016 Storm Names
The following list of names will be used for named storms that form in the North Atlantic in 2016. Retired names, if any, will be announced by the World Meteorological Organization in the spring of 2017. The names not retired from this list will be used again in the 2022 season. This is the same list used in the 2010 season, with the exception of Ian and Tobias, which replaced Igor and Tomas, respectively.
Alex,Bonnie,Colin,Danielle,Earl,Fiona,Gaston,Hermine,Ian,Julia,Karl,Lisa,Matthew,Nicole,Otto,Paula,Richard,Shary,Tobias,Virginie,Walter.