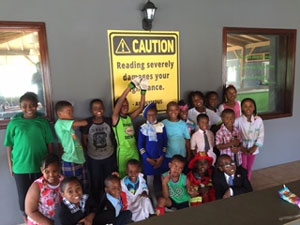 BETTY’S ESTATE:--- The annual children camp organized by teacher Shanna Cornet-de Riggs was “a blessing of children’s laughter and activities at our new venue at Betty’s Estate,” said educator Rhoda Arrindell.
The cultural facility at Alamanda Drive 1 and LB Scot Road is called Source of Inspiration and Learning (SoIL), and was opened by Arrindell on July 1. The camp group is the first organization to rent the venue that is dedicated to youth and cultural programs, said Arrindell.
At least 20 boys and girls participated in the arts and crafts, acting, games, and singing of the mid-year school vacation camp. Cornet-de Riggs also took the children on field trips, said Arrindell.
The campers visited among other places the fire and ambulance departments, and met Prime Minister William Marlin in his office. According to Cornet-de Riggs, “my campers had a blast” – right up to the time that the daily camp ended last Friday afternoon.