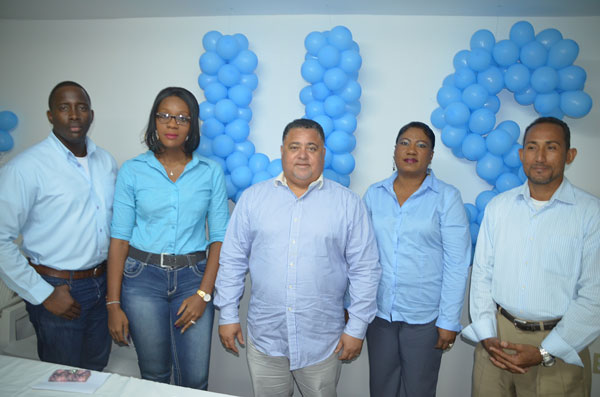 PHILIPSBURG:--- The United St. Maarten People’s Party(USP) headed by Frans Richardson presented four m new faces on Tuesday that will the postulating on the USP slate on September 26h 2016. The four new faces are detective Lyndon Lewis, Agnes Brooks Jelen Collanges and Franklin de Windt.
Party leader Frans Richardson said his political party is all about inclusion especially getting young people that want to serve their country involved. Richardson said St. Maarten is at a crossroad and its time that all decks are on board in order to bring about change.
In introducing himself, detective Lydon Lewis said he is a true son of the soil, who is just 29 years old but chose to serve his country in the justice field for the past nine years. Lewis has dual nationality since he has both Dutch and French citizenship by birth.
In 2007 Lewis was sworn in as an Immigration Officer, and the process of becoming full-fledged Police Officer began the following year. Lewis moved to the division of Basic Police Officer in 2010 and later that year received his first historic promotion as St. Maarten’s youngest Police Sergeant. In 2012 he advanced to the General Detective Department and continued his rise in law enforcement history to become the island’s youngest Police Major, a specialized detective in Juvenile and Vice Cases. Lewis was promoted to Federal Detective in 2014.
Besides being an officer of the law Lewis is also an active member of the ABVO where he assisted in defending civil servants when in need especially with civil court cases.
He said he chose to postulate on the USP slate because it’s the only political party since taking office some nine months ago shows openness and transparency because the Minister of Justice has worked with the unions in resolving issues affecting police officers, besides that he said that with the USP in government much more could be done to better enhance the justice system.

Jelen Coulanges, a mother of two who was born on St. Maarten she is from Haitian decent, her father she said is a well-known fisherman who lives in Simpson Bay. Collanges said she was taught to always respect others and be humble and as such one of the things that she intends to champion the high cost of living on St. Maarten.

One of my vision for this country is to create a large group of entrepreneurs giving them the platform to excel in their chosen industry, one of the reasons she believes that must always be incentives for locals in order for them to invest in business.

Franklin de Windt was born in the Dominican Republic who moves to St. Maarten some 25 years ago he works both in the casino and transportation industries, his goals are to build more roads to reduce the heavy traffic, and allow drivers to get their destination faster. He also believes that more needs to be done to reduce crime on St. Maarten because it is destroying the country’s only economy which is tourism. De Windt aid that focus has to be placed on building more sports facilities in order to get youths off the streets and which would also give youths the opportunity to become stronger in the sporting industry that they could become professionals in whatever sports they chose.
Another vibrant candidate that will be postulating on the USP slate is Delphine Agnes Brooks Mardenborough, a born St. Maartener and mother of two. Brooks owns her own business for the past 18 years said she also worked on a number of social projects through non – profit organizations. She even represented St. Maarten overseas and has worked on policies for play schools and the children’s homes on the island. Through these non-profit organizations she managed to build a strong foundation for the youths spiritually, emotionally and through physical education. Asked by SMN News why she took so long to come forward to represent youths and women in the work force, Brooks said she believes now is her time since she is ready to work in the interest of her people.

Click here to view photos of the four new candidates on the USP slate.