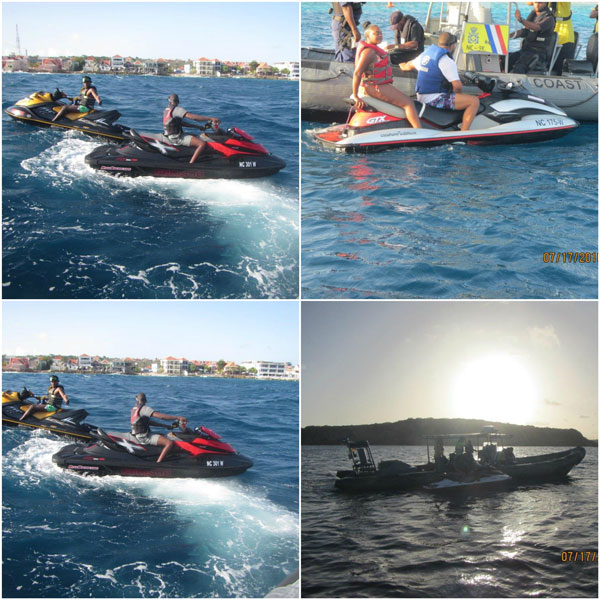 Willemstad: --- The Caribbean Coastguard (KWCARIB) On Sunday, July 17th, in collaboration with the Police Korps Curacao, conducted a control and audit on Curacao waters. These controls were aimed at reckless boating behavior of watercraft, suspicious of wreckless sailing vessels. This is one of the themes that KWCARIB has with the prosecutor’s office in order to gather information prior to prosecution.
In the St. Anna Bay to Fuikbay there were nineteen (19) checks carried of that (8) of the boat owners received a (OPV). Six (6) of them were personal watercraft drivers who were not in possession of a certificate of competence (license). Furthermore, mainly after sunset some watercraft were found without lights and still circulating in the waters. After a chase at the height of the Kima Kalki Marina a watercraft was seized because the owner was not in possession of his documentation including his registration. In consultation with the Chief Public Prosecutor, who took part at the time of the action, it was decided that the owner had to arrange his ship's papers for his vessel before it could be released to him. The Coast Guard will continue this type of operation in the future to maintain public order.