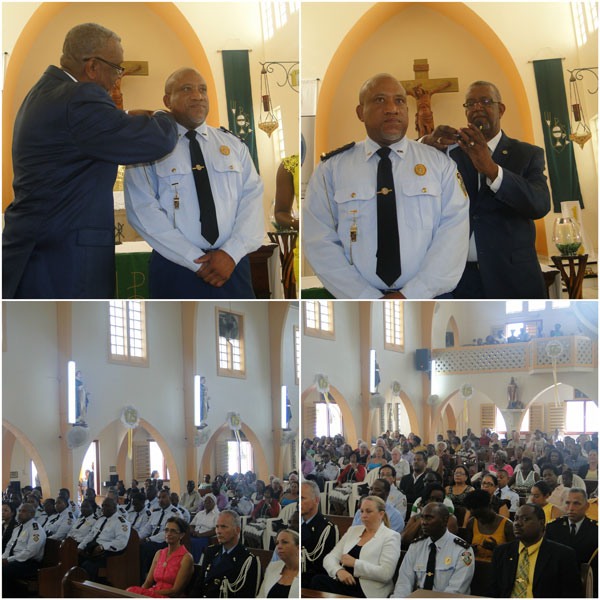 PHILIPSBURG:--- The pinning service of Chief Commissioner of Police Carl John which was cancelled by Minister of Justice and former Minister of Justice Richard Gibson Sr. due to financial constrains was done during the International Justice Day ceremony on Sunday. The officially pinning service was done at the St. Maarten Roman Catholic Church. John was given his pins since last year but refused to wear them because the pinning service was cancelled.
In press release Police Spokesman Ricardo Henson said that the Minister of Justice was granted the opportunity in the presence of those attending the service to officially honor the Chhief of Police Carl John by replacing his rank insignias of commissioner to Chief Commissioner of police. The Minister congratulated the police chief for the tremendous job that he is doing considering the limited means he has at his disposal and encouraged him to continue serve and protect the community of Sint Maarten in the best manner he can.
During his short speech to those attending the church service Chief Commissioner John stated that he gladly accepts this honor by the Minister of Justice on behalf of all the officers and other staff in the police force who on a daily basis go out and perform their duty. He said these are the persons that really deserve this honor.
The Minister did not only choose the right day but, the right place to honor him and for that he is very grateful. It is not about Carl John getting another star on his shoulder, but about accepting the responsibility of leading the Police Force of Sint Maarten to serve and protect the community the best way possible.
Finally the police chief thanked his family and asked them to continue to support him during the many challenges that he will encounter and congratulated all colleagues on ‘International Justice Day”

“International Justice Day” commemorated
The Ministry of Justice of Sint Maarten headed by the Minister of Justice the Honorable Edson Kirindongo, on Sunday July 17th commemorated and celebrated “International Justice Day” with a well attended church service held at the Roman Catholic Church on Front Street. The service was well attended by different department heads, such as the Royal Marechaussee, Customs, Coast, Police Department and other colleagues within the Justice Ministry, their families, friends and many members of the community.
During his speech the minister stated: I want sincerely thank you, for attending this church service this morning, as today we celebrate “International Justice Day”.
“International Justice Day” commemorates and it marks the importance of continuing the fight against impunity and bringing justice for the victims of crime in general, around the world. Those who commit crimes on a large or systematic scale should be held accountable.
It is without any doubt that since 10-10-10 the Ministry of Justice of Sint Maarten has made and is still making great effort to strengthen and improve the functional cooperation in justice-related matters with our counterparts on French Saint Martin, the Netherlands, Curacao, Aruba, BES islands and other island countries in the region, as an overall strategy to not only efficiently serve the people of Sint Maarten, but to also become a dependable partner within the Eastern Caribbean region and Dutch Kingdom.
I want to sincerely congratulate all Justice Ministries mainly in this region and around the world, in particular the colleagues working in the Ministry of Justice on Sint Maarten and their families on this very memorable day as I look forward for your continued support in the fight against crime.