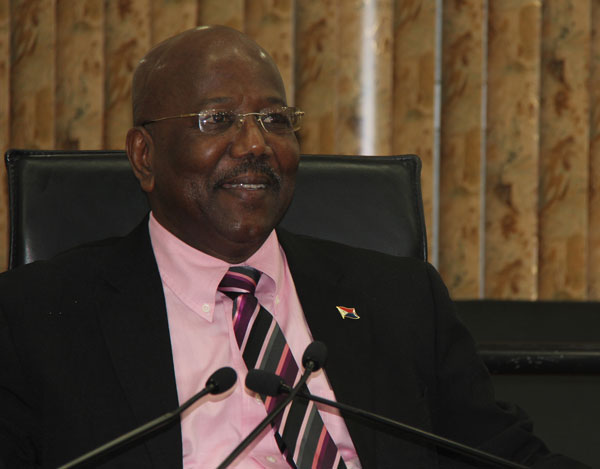 PHILIPSBURG:--- Prime Minister William Marlin made clear on Wednesday during the Council of Ministers press briefing that his government does not have any plans to postpone the September 26th parliamentary elections, even though the Kingdom Council and the Council of Advice on St. Maarten did not support the changes made in the Electoral Reform. He said both councils felt that the changes will affect the ‘free mandate” given to Members of Parliament.
Marlin said it’s a pity that both advisory bodies both locally and the Netherlands are holding on to principles at the founding of the Kingdom. Marlin said even though St. Maarten is part of the Kingdom it’s been over 60 years since the former Netherlands Antilles and now countries within the Kingdom have their own parliamentary democracy. He said that it is not normal that the Kingdom would say that there are four countries within the Kingdom but when convenient to them there is equality and when it is not convenient they would say that these are separate countries.
Marlin said even Saba, Statia and Bonaire are now fighting for equality. He said there is need to solve this particular problem which is applicable to St. Maarten because one can hold an election “today” and by the following day a person that was elected on the slate of any political party could jump ship and form government with other political parties.
Marlin said in response to the advices he received from both councils he drafted a proposal to amend article 33 of the country’s constitution which would state that the Prime Minister needs to have support from one or more political parties to form a government. However, Marlin said that while the amendment is ready the Parliament of St. Maarten is currently on recess and this matter could only be handled in August when Parliament resumes, he said that the only thing they are striving to do is to regulate something that have been plaguing the island that existed for years.
He gave an example that when there is a formation of any government, the Governor who represents the King does not meet with all members of parliament, instead he meets with the leaders of the political parties and after that a formateur is appointed who in turn selects the Ministers based on the political accord signed by the various political parties that forms the government. He made clear the only that is done by the governor is the oath taking ceremony that is done by the Governor on behalf of the King.

Government Building not yet completed --- Marlin deadline through the door.
Prime Minister William Marlin announced on Wednesday that “his” deadline he placed on the completion of the government administration building on Pond Island has now passed and the building is yet to be completed. The Prime Minister said that technically Ministers could move in the building but it is not fully completed. However, the contractors are working rigorously towards the completion of the building which would be before the end of the year. He said the building already has water and electricity, air-conditioning and the elevators are in working condition. He said they have waited for 8 years and to move into an incomplete building does not make much sense.
He said they recently signed a contract with TELEM for fiber optic cabling and they are also signing another contract with another company (UTS) for a back-up system.
Marlin said that tiles had to be ordered for the walkway which would should arrive on island sometime this week. He said the parking garage is not yet in place but there is parking in front of the building. He said the entire cabling had to be redone because both electrical and data cabling were placed in the same track and since all of this was done over 8 years ago some of it deteriorated.
Roadside contracts yet to be signed.
The Prime Minister also announced that some 37 persons submitted bids for the cleaning of the roadsides and trenches but of that amount 12 of them did not meet the requirements, therefore they were disqualified.
He said the evaluation committee and the Secretary General of VROMI are busy working on an advice which has to pass through the Council of Ministers before the contracts could be signed off. Marlin called on the people to be a little bit more patient because those contracts will soon be awarded and the persons that got the contracts will not need heavy equipment to begin working.
The Prime Minister said the intention to separate the roadside cleaning contracts from the garbage collection contracts was to create more jobs and give business people from each district the opportunity to work in their own community.