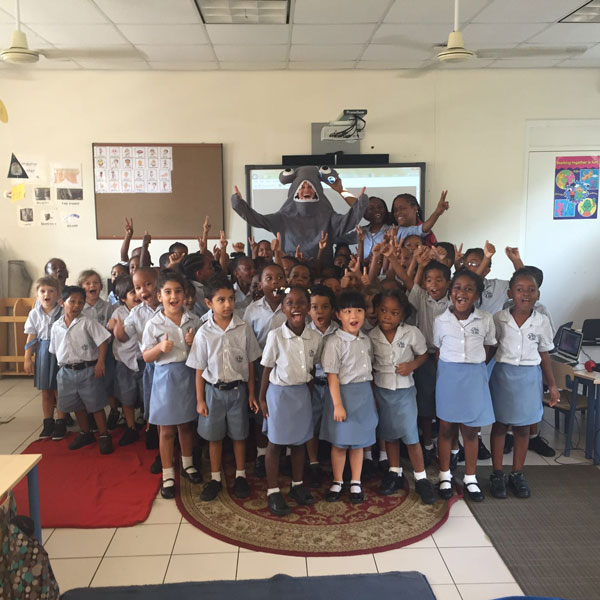 PHILIPSBURG:--- The St. Maarten Nature Foundation visited primary and secondary schools to educate students about the importance of sharks. Jillian Morris and Duncan Brake from Sharks4kids provided interesting presentations to many students of St. Maarten schools. The students learned about different shark species, the importance of sharks for our reefs and tourism, depletion of sharks and why they need our help. The school visits were part of the DCNA ‘Save our Shark’ project funded by the Dutch National Postcode Lottery.
“During St Maarten Shark Week we visited six schools and we spoke with roughly 700 students about sharks. We successfully visited the following schools; MPC, Charlotte Brookson Academy, Hillside Christian School Asha Stevens Campus, St Maarten Academy, St Dominic High School and St Dominic Primary School,” says Melanie from the Nature Foundation.
When seeing a shark you shouldn’t be afraid, sharks are in no way dangerous for humans. “A lot of students think that sharks do eat people. This is a misunderstanding, we are not on the menu for sharks, sharks do not eat people. Occasionally shark bites do happen, on average five people per year die of an injury caused by a shark bite, it is more likely that you get killed by a coconut falling on your head than by a shark’, says Jillian Morris from Shark4Kids. Tadzio Bervoets from the Nature Foundation continues with, “In St Maarten waters no unprovoked shark bite was ever recorded, it is safe to snorkel, dive and swim with sharks.”
Humans kill about 100 million sharks every year, if we continue many shark species will go extinct. Oceans without sharks will have unpredictable and presumably negative impacts for marine life, fisheries and islands, as we depend on our oceans. “We need to educate the future generation about sharks and their importance for the health of our marine life. Besides, we need to make them aware that we as an island nation depend a lot on our healthy reefs and clear waters. Tourists come to St. Maarten for our sharks and this generates income for everybody living on this island. Therefore a shark is far more worth alive ($250,000) than dead ($50) over its life time’, says Melanie.
St Maarten is taking action to make sure Nature is our future, during the Shark Conservation Symposium on the 15th of June, the St. Maarten Government announced a shark sanctuary in their exclusive economic zones (EEZs). This means that sharks are now long-term protected on St. Maarten, which is a great step forward in nature conservation and eco-tourism. The Nature Foundation will continue to educate the public about the importance of sharks and will organize the school visits for Shark Week again next year.