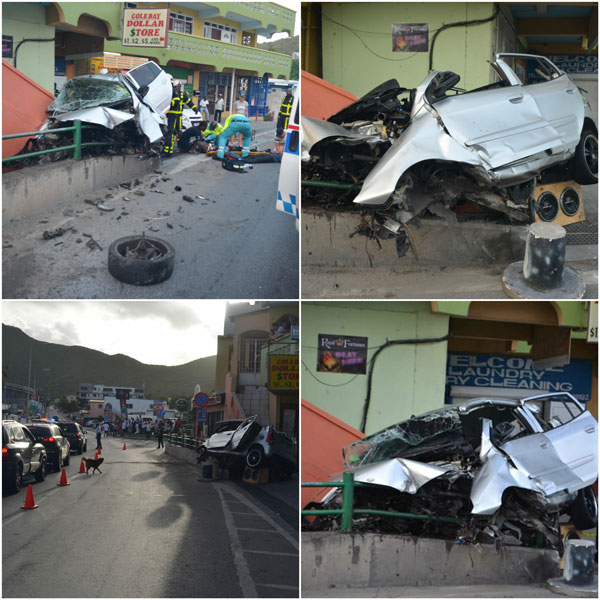 PHILIPSBURG:---The police traffic department is presently investigating a very serious traffic accident which took place on Sunday June 5th at approximately 05.50 a.m. on the Welfare road in the vicinity of Eduardo’s Guest House. Police, Fire and ambulance Department were immediately informed of the situation. A vehicle with license plate M-2654 in which two males and one female were driving was, according to witnesses, traveling at very high speed coming from Simpson Bay towards Cole Bay area collided “head on” with the guard rail and the concrete steps leading to the upper stairs of the guesthouse. The impact was extremely severe causing all three victims to become trapped in the vehicle. The Fire department immediately went to work using the “Jaws of life” to remove the victims from the wreckage.
After the victims were removed from the vehicle they were transported to the Sint Maarten Medical center for further treatment. There were no visible external injuries. However the all three victims refused to be treated at the Sint Maarten Medical Center and preferred to be treated on the French Side. The were transported by ambulance to the hospital on the French side. The traffic department is still investigation the exact cause of the accident.