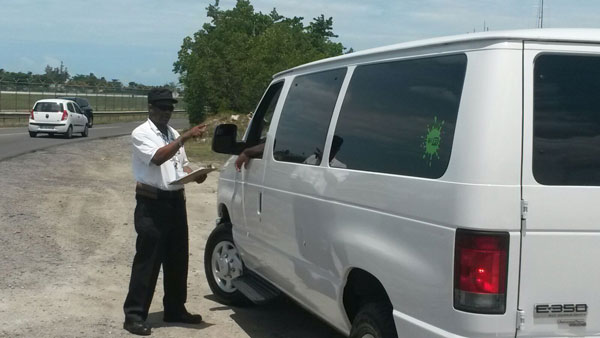 GREAT BAY(DCOMM):---The Ministry of Tourism, Economic Affairs, Transport and Telecommunications (Ministry TEATT), Controllers from Section Transportation a.k.a. Control Unit, carried on a control on May 27th at several locations in Simpson Bay and Cole Bay.
For approximately two hours the Controllers conducted controls on both sides of the causeway. A total of 45 vehicles were controlled and two (2) were issued fines.
Out of the total controlled vehicles 10 were public buses and two were taxis. The fines issued were for tint darker than the allowable limit and driving without a seat belt.
One bus driver residing on the Dutch side of the island was stopped and controlled as he had no permission to operate on the French side of the island. This violation was handled according to the steps in the Inspectorate’s Enforcement Policy.
The Inspectorate is hereby issuing a stern warning to all public bus and taxi drivers who do not have permission to operate on the French side of the island to immediately cease from doing so.
Only persons in possession of the Dutch nationality are allowed to operate on the French side of the island. This condition is clearly stated on your public transportation permit. As permit holder if you do not abide by the conditions of your permit you are deemed to have operated without permission and this can result in sanctions being taken against you up to and including revocation of your permit by the Minister TEATT.
If you have any questions please contact our office at 542-4511 or 542-4509 or email This email address is being protected from spambots. You need JavaScript enabled to view it.